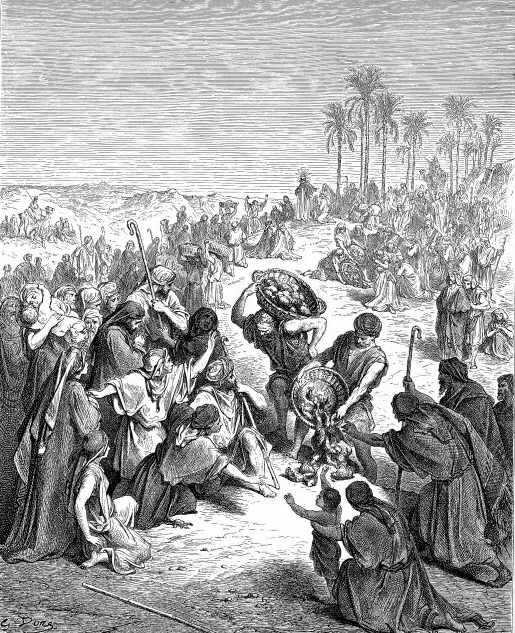 And Jesus took the loaves; and when he had given thanks, he distributed to the disciples, and the disciples to them that were set down…(St. John 6:11).

At the heart of humanity’s self-inflicted separation from God is one poisonous idea: God isn’t enough. Again and again, generation after generation, Mankind awakens to find itself in a bountiful world of beauty and promise gifted to us by the Creator. Of course, this same world has been wounded by humanity’s selfishness and sin, wracked by the cosmic affliction which comes from humanity’s failure to be the faithful stewards of all God has given us. As we hear in God’s original command to His first image bearers, “Be fruitful and multiply and fill the earth and subdue it, and have dominion over the fish of the sea and over the birds of the heavens and over every living thing that moves on the earth” (Genesis 1:28). Humanity was meant to be part of the great divine project to rule—in love and equity—a good world: a precious earth-shaped jewel in the crown of God’s universe spanning creation.

For that purpose, God gave our first parents “…every plant yielding seed that is on the face of all the earth, and every tree with seed in its fruit. You shall have them for food” (Genesis 1:29). Humanity, with God’s breath moving through its lungs, stepped into its destiny fed by the miraculous food of God’s good creation. Before the fall of Man, we see a world created from nothing as a gift for God’s junior partners; we see a powerful alliance between Creator and creature in which humanity lived in the will of God for the glory of God and thus received the incalculable benefits of living within the life-giving order God had brought to the chaos of uncreated space. The death and decay, hunger and pain we experience now are simply the symptoms of being, in our own ways, tragically dislodged from this order.

And, this rebellion from the grounding of reality began with eating; it began with Adam’s act of anti-communion (his black mass) where the union between God and Man was broken in the first taste of evil: this perverse, false sacrament of disunion and alienation. We might complain that eating or not eating from a particular tree is a stupid or arbitrary way of setting the boundary between good and evil, but this would be to ignore the inherent mercy of setting up such a visible and straightforward line of demarcation between right and wrong—one can’t accidentally eat a piece of fruit. But, we would also be ignoring all the many powerful symbols which govern our own up-to-date, modern lives: one could easily say borders are just imaginary lines, but a walk across the Korean peninsula’s 38th parallel is to step between two different worlds. Or, what about money? The dollars in our pockets have no intrinsic value: they are symbols of a value regulated by our government, and yet these symbols govern so much of our lives because of the power someone tells us they have. Whether it is the fruit of the garden or the bread of heaven, God’s symbols are much more real than even these examples because they are the divinely established marks of our eternal status. To eat the fruit of the tree was to declare citizenship in the ranks of death; to eat of the bread of heaven is to regain again the divine benefits of being on God’s side in the war between good and evil.

If we then think about salvation as the Trinity’s mission to bring about the new heaven and new earth, it all must flow through humanity regaining its dominion over the earth. This project begins with Abraham, but finds its great opening crescendo in the first exodus of God’s people from the land of Egypt.  It is there that God pulls humanity’s representative people, God’s new allies against evil, away from the most powerful nation on earth—defeating their false gods and chariots in a massive display of the true God’s irresistible strength and indomitable might. The Creator saves His people because it is through these people that He will save the creation. By day, the new Adams and Eves of liberated Israel are led by a pillar of cloud, by night fire in the sky tells them where to go, and once again, God feeds His people.  As our Lord tells Moses, “Behold, I am about to rain bread from heaven for you…” (Exod. 16:4), or as the Psalms put it, “So he commanded the clouds above, and opened the doors of heaven. He rained down manna also upon them for to eat, and gave them food from heaven. So man did eat angels’ food; for he sent them bread enough” (Psalm 78:24-26). As the Israelites worshiped and prepared for their great mission to reverse the curse of Adam, they walked through Adam’s wilderness, once again led by God’s clear direction, once again fed from God’s hand.

But, as if we needed one more reminder, humanity stinks at saving the world. I am always amazed at people who have faith in humanity but not in God. The kind of people who are sure there exists a future world in which we can cure ourselves of the selfishness and evil which always plagues our best intentions: here is where one goes to find “blind faith.” Of course, the rest of the Old Testament is the painful story of what it looks like for a people to eat the poisoned fruit of every tree they can find. God gives the law—another clear line of demarcation between good and evil, but instead of one command (don’t eat from that bloody tree) 613 commands were established to bridge the yawning chasm generations of sinfulness had created between holy God and unholy people. Imagine trying to construct such a comprehensive law in our own day. We would need another 1,000 rules just for the internet (an example, thou shalt not reconnect with your old high school sweet-heart on Facebook). What the divine law makes abundantly clear is that humanity lives in a deeper and deeper valley of the shadow of death, so very separated from the life-giving God. Jerusalem, the capital city of the world’s great hope, falls to Babylonian and Roman invaders because not only do the people fail to live in the ordered world envisioned by God’s law, but perversely, they joined with their pagan neighbors as Adam joined with Satan to let evil into the kingdom, and where evil thrives holiness dies. Jesus Himself dramatically acts out the future destruction of the temple during the first Passover of His public ministry—whipping the money changers and driving out the animals designated for sacrifice. St. John saw Jesus’ prophetic acting out of the temple’s destruction with his own eyes, and what he most wants us to remember is that Jesus called Himself the true temple—the temple which would be torn down and rebuilt in three days, the temple from which the true Passover lamb would come, the temple from which God’s new allies would be inspirited, reborn, and empowered for the fight which lies before them.

If we understand then that all of the institutions of the Israelite people find their perfection in the ultimate Israelite we start to have a good understanding of what is going on in the second Passover of Jesus’ ministry. The feeding of the 5,000 is another prophetic acting out of who Jesus is; it is a sign of just who stands before the thousands gathered around the mysterious Galilean. God is reaching out once again to do what He has done from the beginning: feed His allies in the fight against evil. The same God who fed Adam and Eve in the garden, the same God who dropped mana from heaven takes the cheap bread of a poor, young boy and makes it a feast for His people.  But again, what do the people do? By the end of chapter 6, the thousands have abandoned Jesus—God is again betrayed by the people He feeds. It is only the 12 which continue to follow God through the wilderness: feeding on the Word, following the heart of the universe as He proclaimed the kingdom of God.

Which brings us, of course, to the 3rd Passover of Christ’s earthly ministry: the upper room where Jesus was surrounded by that same 12. And here at the Last Supper, once again, God feeds His people. It is in this feeding, that all the hopes of the world rest. For it is here that the people of God’s new covenant, reborn in baptism—escorted safely through the second Red Sea—are given the food we need to make it through our own wilderness wandering, to stand firm against the Serpent’s temptations and lies. God feeds us from Himself, from His own perfect holiness and love, and we are finally made whole. Through the Holy Communion, we are made partakers of the sacrifice of Christ on the Cross so that we may never again say, “Where is God?” The only haunting question which remains for us, and our family and neighbors and enemies, is this: “Where are we?” Are we the allies of God? Are we the holy family of the new Adam once again feasting with the true God in the little Eden of our church? Or, are we on the outside looking in—hoping the gluttonous extravagances of the dying world will fill us, hoping one more betrayal of the God who feeds us will bring happiness rather than the same desperation which carried Judas to the tree of his suicide. Let it never be so. God has taken our meager offerings of cheap bread and wine, He has looked into our paten and chalice, and He has promised to use these gifts to fill us with love and hope. For the first time since Adam voluntarily gave his crown to Satan, humanity has a king worth dying for.  Christ is the LORD OUR RIGHTEOUSNESS, and He is calling us to the feast. Let us eat at His table and be filled forever.