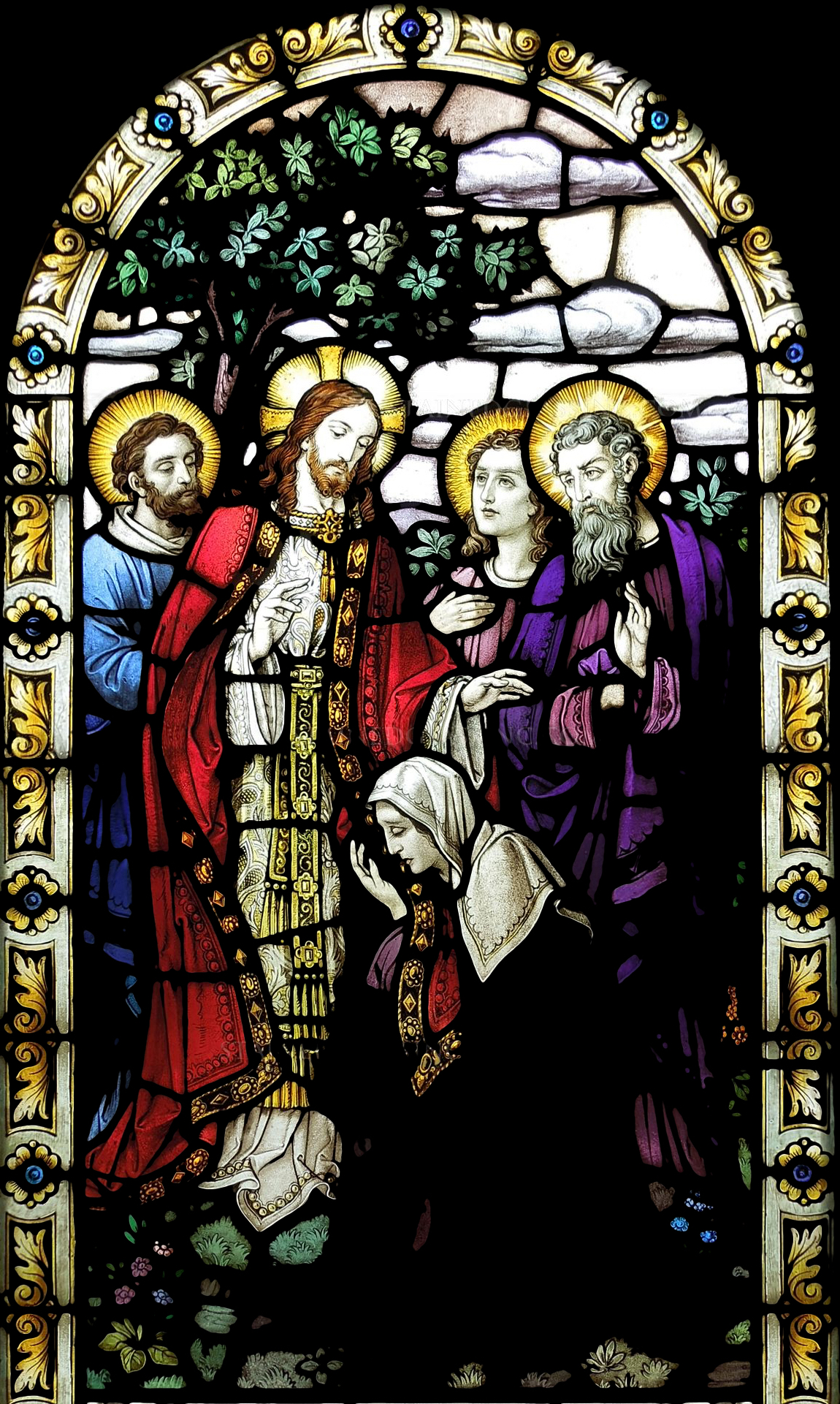 While he was saying these things to them, behold, a ruler came in and knelt before him, saying, “My daughter has just died, but come and lay your hand on her, and she will live” (St. Matthew 9:18)

In today’s Gospel reading, we are witnesses to a woman healed and a little girl raised from the dead.  Our initial reaction to hearing these tales of miraculous healing might be an awful lot like the professional musicians and mourners staking out the grieving ruler’s house.  We have been instructed by a small unbelieving world to roll our eyes at talk of miraculous healings, or conversely, to naively believe in the healing power of every charlatan with personal charisma and a commanding presence.  Whenever I see an evil huckster like Benny Hinn or those misguided fools at Bethel preying on the sincere hopes of the dying and grieved, it makes me have more and more sympathy for the cold materialist refusing to believe in anything that doesn’t fit into his darkly comforting worldview.  Indeed, if not for the grace of God and His gift of faith, surely I would be among the scoffers who hear Jesus promise healing and everlasting life and respond with mocking laughter.

However, as we look at this healing and raising, the faith of the woman and the father should never leave the forefront of our minds, but we also can’t help but see how suffering has acted as an instrument of summoning in these two demonstrations of God the Son’s divinity.  Who would wish on their worst enemy the pain experienced by a father watching his young daughter die or the 12 year ordeal of the ritually unclean woman?  If we were to ask just about anyone what they most feared, the loss of a child or a painful, lingering illness would certainly top the list, but we must always remember both these dreadful horrors are the inescapable end of the human experience.  Eventually, everyone’s children will die, and eventually, we all will get sick with something that will kill us.  Our 1st world hospitals and longer life expectancies may give us a few more years than the men and women who first saw Jesus recreating the world one person at a time, but our position is every much as desperate.  Today’s healing and reversal of death then isn’t just a little story about two people and how God helped them out; no, we are forced by the Word of God to see that we are looking at ourselves and the God/man who has come to cure the human condition of alienation and death.

And it is the alienation and pain and death which come from Man’s stupid, insane war with God that is so convincingly destroyed by Christ today.  The suffering woman, healed by simply touching the fringe of His garment, is a casualty of sin and hate, an outcast marked by her 12 year ritual uncleanness.  To the 1st century world, to our world, it would be hard to imagine a person less likely to have her faith commended by the messiah.  But as we daily recite in the Magnificat, “For he hath regarded, the lowliness of his handmaiden…”. God is not a respecter of persons because He is the all powerful Creator of the universe.  Any earthly success we cobble together may impress our fellow creatures, and we may be blessed to use our temporal successes to glorify God, but our successes will never, ever dazzle Him who formed everything from nothing.  And, quite frankly, we should thank God every day that He doesn’t judge us all by our accomplishments, for compared to Him, we all would be as lowly and undesirable as the poor woman desperately grasping at our Lord’s cloak.

Blessedly, we see in this groveling woman’s faith the only thing that matters once we recognize our own humble status before the Lord; she is the very embodiment of St. Paul’s example of faith in the Epistle to the Hebrews, “…without faith it is impossible to please [God], for whoever would draw near to God must believe that he exists and that he rewards those who seek him” (Hebrews 11:6).  St. Augustine, in a sermon on this passage, notes that many, many people are pressing against Jesus, but there is only one who is healed because there is only one who truly knows the depths of her need and only one who wholly trusts that her desperate need can only be satisfied by the God/Man which both suffering and faith have demanded she seek.  We see too how far from Christ the self-righteous truly are, for it is only the man or woman who recognizes how sinful and unclean and broken they are before the holy God that can even begin to be cured in the forgiveness and mercy He freely gives to those who seek him and die with Him in this life.  Jesus sees the faithful, suffering outcast, and He calls her “daughter.”  We should pray every day that He may say the same to us.

And then we are faced with the dying little girl; we are faced with the greatest condemnation of our empires of sin and filth and folly; the greatest sign of our powerlessness in the face of death’s crushing totality. Humanity doesn’t deserve children; we deserve ash and pain, but through children, God blesses our cruel world with little, living glimpses of a perfect humanity to come. Children are not innocent, but they are less scarred from the great war which is slowly killing us all. Children make our world immeasurably better because they seek out and share joy, pure joy, joy even in the smallest gifts their heavenly Father gives them. So, it is right and good that we mourn when children are taken home to be with that same Father, but the mourning is only for our incalculable loss, not for what they have lost, for they have lost nothing but pain and gained everything in return.

The father of today’s Gospel reading, on his knees begging Jesus to come and save his dying child has been a recipient of the joyous gift I just described, but he has been given still another gift from his daughter, for it is her imminent death which has ripped away any skepticism or pride which might have prevented him from this act of abject surrender before the Lord. What good is pride or money or any of the other nonsense people care about when that which one most loves in the world can no longer be protected by our love and strength? We would give it all up to save that love; we would burn down our lives and face every humiliation to save that love. It isn’t an accident that Christ feels compassion for this grieving father, for it is this father’s willingness to do anything for love which most closely emulates the Trinity’s mission to save the world: “For God so loved the world, that he gave his only begotten Son, that whosoever believeth in him should not perish, but have eternal life” (St. John 3:16). The Son who stands before this broken, begging father is the Son who has answered the Father’s call to die for the children He loves, to stand in the space between sin and a parent’s love, to stand in that space and make true and beautiful and perfect love victorious forever. This victory is not some abstract longing or immaterial hope.  Just as the great sacrifice was a real Son dying for the real sin and real pain we inflict upon each other, the great victory is a real universe restored: creation healed, tears wiped away, children back in our arms.

To show us what this triumph will look like, the Son whose every step brings Him closer to this victory, stands up and follows this father to his home where He finds the professional mourners and the ruler’s neighbors crowding around the freshly dead little girl.  And what does He do? He says, “Go away, for the girl is not dead but sleeping” (St. Matt. 9:24).  The cynical professionals laugh at Jesus, after all, they know what a dead body looks like.  It is always good to remember that people in the 1st century were not idiots when it came to life and death.  They knew people didn’t just come back to life. Their laughter, their mocking derision, is perfectly reasonable except for the fact that they are in the presence of the living God. I am always struck by the way Jesus demands the unbelievers leave the room. We probably imagine Jesus should have insisted they stay, so perhaps their unbelief might be cured by the raising of the dead little girl, but no, Jesus only lets the faithful into the room where their faith will be honored and channeled into a reversal of death’s curse.  Jesus is not a showman; He isn’t performing tricks in order that we might have faith.  No, faith itself is a blessing upon us which makes us worthy to behold and be a part of the great recreation of this world.  The little girl rising from her death bed is only the beginning, and it is only the faithful who are allowed to see the glory of God begin to defeat death forever.

And it is only the beginning. The God who calls outcasts to be his daughters, the God who gives dead children back to their fathers, it is this God who calls out to you now. He has sent me to proclaim to you His love. Let us answer the call with our souls and bodies: broken, bloodied, but undefeated. Let us carry our scars to the altar today; let us kneel before our scarred Savior and welcome His love to coarse through us, to heal us, to prepare us for all God’s children to come home.