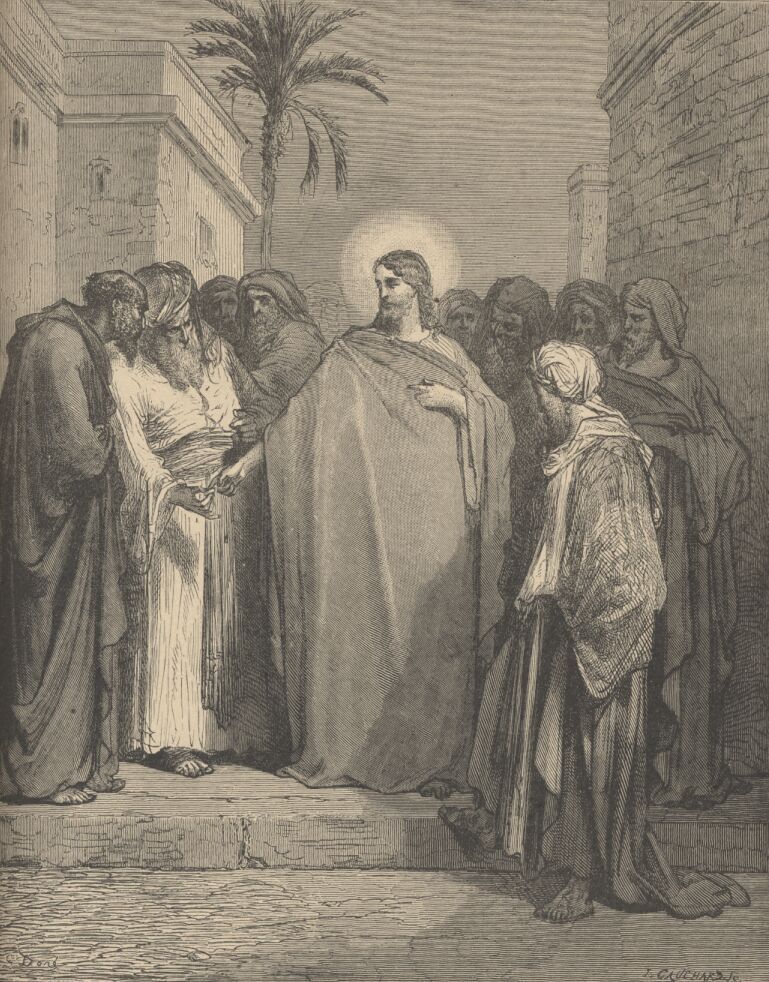 But our citizenship is in heaven, and from it we await a Savior, the Lord Jesus Christ, who will transform our lowly body to be like his glorious body, by the power that enables him even to subject all things to himself (Philippians 3:20).

What does it mean to await a Savior?  I thought about this question a lot this past week after sitting and praying with an older woman dying of cancer.  Her tired, broken body is slowly shutting down, and it is only a matter of time until she takes her last breath; although, I suppose the same could be said of all of us.  I’m not sure how many of us have felt that special powerlessness one feels in the presence of a dying person—the inescapable knowledge that nothing I can do can change what is about to happen—the realization that none of my accomplishments or power or emotions are enough to make this beautiful child of God, or even those whom I love the most in all creation, more alive.  Just a casual look at this dying woman would show us she needs to be saved from the human condition itself, and as much as I would like to, I just can’t do it.

The Psalms, the divine prayerbook of Jesus and His church, give some beautiful examples of this utter powerlessness: “My heart is in anguish within me; the terrors of death have fallen upon me. Fear and trembling come upon me, and horror overwhelms me. And I say, ‘Oh, that I had wings like a dove! I would fly away and be at rest; yes, I would wander far away; I would lodge in the wilderness; I would hurry to find a shelter from the raging wind and tempest’” (Psalm 55:4-8).  Faced with the inevitability of death, our natural instinct is to run and hide.  The poet Dylan Thomas, however, exhorted us: “Do not go gentle into that good night, Old age should burn and rage at close of day; Rage, rage against the dying of the light,” but Thomas died in a coma at age 39 brought on by drinking himself to death.  We see, in the end, even our anger and will are stripped from us in the shocking humiliation of our final minutes.  All men will be humbled, it is only a matter of why and when.

The Apostle Paul, who describes himself as the slave of Jesus Christ, speaks to us today from within the invincible hope of a human soul humbled by reality.  When the primary inspired author of the New Testament tells the Philippian church to imitate him, he is not boasting about his own power or excellence.  How could he be?  This man knows his past; he knows that the risen Savior had to besiege him on the road to Damascus and burn down the walls of sin and false religion which made him feel secure while arresting Christians and assisting in their bloody executions.  When St. Paul says, “Imitate me,” he is telling us to look at the remains of his once proud castle left ruined by the call of Christ, and to see the fruit tree, planted by the Holy Spirit, growing in the center of his ravaged defenses.  The reality St. Paul would have us grasp, the uncomfortable truth revealed when Christ makes us His own, is that our pride and strength were always an illusion.  An illusion whose secrets are revealed by events as lowly as a common cold.  But the lie of control is so much more appealing than the reality of distress, and it is so very easy for Christians to imitate the examples of those who really believe in their own pride and temporary strength.  That is why Paul tells the congregation to look to him and his fellow workers, men like Timothy and Epaphroditus, to see the kind of reality based life the lost and found must follow.

The driving assumption of St. Paul’s warning is that exposure to the fallen world’s lies will have a negative effect upon believers recovering from the slavery those lies inevitably bring.  This constant proximity to evil necessitates the daily cleansing of ourselves in the Word of God and the receiving of His sacraments as regularly as we possibly can, but in our text today, we see the importance of human interaction among people the Holy Spirit is rebuilding.  The community of faith must be exactly that, a thriving other-worldly citizenry living together and preparing for our future in the new heaven and the new earth.  We need our brothers and sisters in faith to love us and defend us when the world turns its back on us, or more insidiously, when the world tries to seduce us into believing its anesthetizing fictions and soul deadening fables—untruths proclaimed so loudly that we feel their vibrations in our hearts and can begin to believe they come from within.

For there are real consequences when we fail to seek out Christian brothers and sisters to help us in a fallen world, and there are real consequences for those who could be those Christian leaders failing in their duty and leading people astray—either through sloth or active disobedience. St. Paul wholly trusts in the goodness of His Savior, for he wouldn’t know what goodness is if his Savior hadn’t shown him, but he still weeps for all those outside the community of faith.  He writes, “Their end is destruction, their god is their belly, and they glory in their shame, with minds set on earthly things” (Philippians 3:19).  St. Paul calls them “enemies of the cross of Christ,” and he is describing the default position of a fallen humanity.

Paul’s description of the enemies of God fits two very different types of people, or better to say, people who think they are very different from each other.

The first religious type would be those who try to radically separate the body from the soul or mind.  These people, then and now, see little importance in the activities of the body and rest their entire hope for salvation on the special knowledge they possess.  You could hear this creed from a 1st century Roman talking about his boutique philosophy or mystical religion or from a 21st century American talking about books by perfectly competent scientists moonlighting as bad theologians or books describing mystical experiences endorsed by hipster pastors and all the rest of those half-baked religious videos peppered about YouTube.  All of these products convince people that holiness is another word for fulfillment, and you too can get fulfillment if you pay $29.99 to get as happy as me.  These God denying creeds are ultimately unsatisfying, so people fill the God shaped hole in their life with consumption—food, drugs, sex, and possessions.  As Paul writes, “Their god is their belly and they glory in their shame with minds set on earthly things.”  Or, as Malcolm Muggeridge put it, “Sex is the mysticism of a materialist society, with its own mysteries…and its own sacred texts and scripture—the erotica that fall like black atomic rain on the just and the unjust alike, drenching us, blinding us, stupefying us.  To be carnally minded is life!”  He wrote that before the U.S. pornography industry became bigger than Hollywood and all our professional sporting leagues.  In our enlightened age, we’ve traded the enslaved temple prostitutes of Paul’s day for the enslaved, trafficked women imprisoned on countless screens.  And this horror is merely one example of the way in which evil takes advantage of human weakness and exploits it—the way evil can twist even our greatest technological feats so they harm more than they help.

The second group who declare themselves enemies of the cross are those who believe their own religious merits will save them.  There can be some overlap from the first group, but this religious caste includes everyone from the sincere person who believes one more senator from their political party will bring heaven on earth to the self-righteous pseudo-Christian who looks down on any person they judge less holy than themselves.  In this system, God is, at best, a means to an end or a mascot to be invoked or a talisman to clutch in times of peril.  In this fantasy, we are saving the world and ourselves—God is merely helping.  This cruel belief system breeds disappointment as time after time our false gods fail us—especially when that false god is us. The problem at the heart of all these belief systems is that they are dependent on man somehow transcending his grievous limitations, and yet they offer no proven way for this to occur; we are asked to take it on blind faith that mankind will get it right this time. That shouldn’t be good enough.  It is amazing how often it is.

Blessedly, none of these broken ways of life is how reality actually works.  God is not a concept or a program or a method of fulfillment; He has not given us some new method for self-improvement; no, instead, God has definitively answered the great question of human existence: who will save Man from himself?  The beautiful answer to this question comes in the first advent of Jesus Christ.  It is here that a human first transcends His own sinful temptations to live a life of love and justice; it is here that a human first transcends the lies of this world to live in truth; it is here that a human first transcends the terrors of death to save the new race of Mankind and rise as its glorious first citizen.  This king of the new creation, whose public resurrection vindicated Him for all time, is the only real, concrete hope for a transcendent humanity, and that is why we await His return.  We wait because we acknowledge two key realities: we need a Savior and Jesus Christ has established Himself as the conqueror of death—the master of mortality and thus the master of time itself.  We can trust that Jesus Christ will transform our bodies of humiliation into bodies of glory because, if we are His people, then He suffered and died and rose again to make us members of Humanity 2.0—citizens of a new world saved from us and for us forever.

We began today by hearing the opening of Psalm 55, with its plaintive cries for deliverance from evil.  Staring death in the face, the psalmist continues, “As for me, I will call upon God, and the Lord shall save me…It is he that hath delivered my soul in peace from the battle that was against me” (Psalm 55:17,18).  If our citizenship is in heaven, and we await the triumphant return of our perfect king, then we can expect to be assaulted by the powers of this world, but we need not ever fear them.  As citizens of heaven, destined to live in the new earth Christ’s resurrection guarantees, we are connected to more power than we can even imagine.  We are connected to a destiny not dreamed up in science fiction or the fever dreams of the powerful, but rather built into the fabric of the universe by the loving God who will return to make all things right.  Today, St. Paul tells us to stand firm, not in our strength or our beauty or our intelligence, he tells us to stand firm in the Lord.  In that perfect man stands the future of our strength, our beauty, and our intelligence, and we are to carry that joy—emanating from our future glory—like a passport for our true homeland.  And when we do die, when we are deserted by our body’s strength and beauty and intelligence, we can know that we will be strong enough to take it because our strength lies in our Savior and our eternity rests in His unending glory.