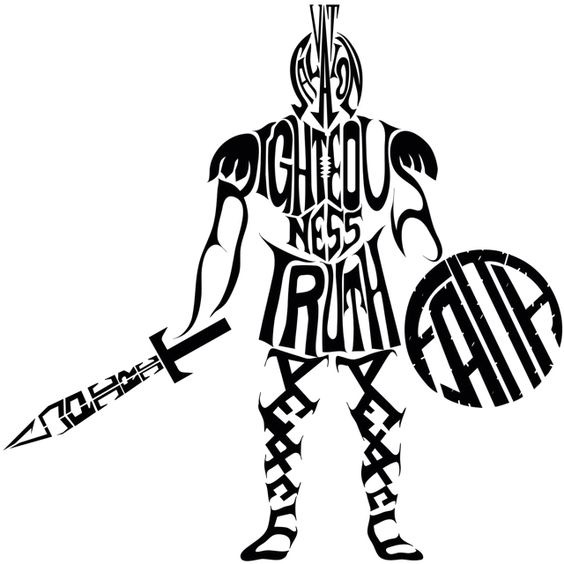 Wherefore take unto you the whole armour of God, that ye may be able to withstand in the evil day, and having done all, to stand (Ephesians 6:13).

In today’s Gospel reading, a powerful man learns the limits of his power when his son begins to die.  The illness murdering the nobleman’s son doesn’t care about his money or status because it answers to a higher power than him or the governor or the emperor.  This young man on his deathbed is feeling the sharp edge of mankind’s rebellion against his Creator; he is experiencing the grim penalty for a human people living in suicidal conflict with the natural order and its author.  We can still hear a faint echo of this truth when both theists and atheists alike refer to a sickness as a “disorder.” The poisoned fruit of living in a chaotic, fallen world is that our very bodies are coming apart at the seams—rebelling against our wills just as we have rebelled against the perfect will of our Creator.  This real decay and death besieging us are the daily reminders that a creature who doesn’t have full control of when he uses the bathroom can’t possibly be in a position to rule himself.  Or, more relevant to today’s reading, a creature who can’t save his son from death can’t possibly be in a position to save himself.  This truth hits our faithful nobleman in the face, and so he humbles himself before a man who has none of the power people hoard and kill for, but who possesses all of the power which actually matters when the lies and distractions of this world are pulled away, and we see how naked and disarmed we truly are.

Understanding the obvious limitations of our human race is where we must begin if we hope to grasp at all why St. Paul commands us to “be strong in the Lord and in the strength of his might” (Ephesians 6:10).  There is categorically no other place from which we can draw real strength because the Lord is the only human being to have defeated death; He is the destroyer of death, and no other power compares.  To prove this truth, we can do a little experiment right now.  Think of the person or persons you love most in the world.  Now, stop them from ever dying.  Or, perhaps, direct me to the gym or health food store or gun shop which will stop you or them from ever dying.  We can laugh at our little experiment because the only alternative is to cry as millions of people seek ultimate meaning and protection in the temporary, dying things of this world.  Realizing the weakness of our modern gods leads to some uncomfortable questions.  Why have children if their ultimate end is to fill a cemetery plot? Why get married if we are merely biding time before we embrace the cold darkness of the grave?  Our fallen world tries to answer these questions.  It says, “Have children because they will fulfill you,” or “Find true love because if feels good,” but here, the secular humanists of the world unite to transform real human beings into mere objects for our temporary enjoyment.  A child or a soul-mate simply becomes a more expensive version of the really good steak or exotic vacation.

The Christian cannot accept this dehumanizing equation, even if so much of our world’s commerce and media depend upon it; no, we do not enter into relationships with other people to feel good; we do not have children to give our lives meaning or help us be less lonely.  Blessedly, Christians enter into relationships to save lives from the darkness.  We become spouses and parents and friends to build communities of real communion with the Living God who promises to save His children from eternal death, just as he saved this nobleman’s son from the temporary death of this world.  Jesus has proved in His ministry and resurrection that my already dying son and daughter can be saved. What wouldn’t I do to follow that Man? What castle would I not storm; what pain would I not endure to serve the Man who has already saved my son and daughter from death?  St. Paul is calling us Christians to a life of dependance on the Divine Man who has already fought the darkness and won.  If we love anyone, how could we not reach for the armor we need to defeat the sin and death which surround them.  What would cause us to abandon them and the tools Christ gives us for victory?

The answer to this haunting question is given by St. Paul when he describes humanity’s great enemy: the devil.  He writes, “For we do not wrestle against flesh and blood, but against the rulers, against the authorities, against the cosmic powers over this present darkness, against the spiritual forces of evil in the heavenly places” (Ephesians 6:12).  Our up-to-date Western world has tried to forget the devil and the fallen angelic host which heeds his evil will.  This practiced ignorance of the supernatural makes good sense for a society so obsessed with the cycle of self-help and self-destruction.  We are comforted by the idea that no matter how badly we treat ourselves, there will always be a cleanse or a workout regime or a pill to make us better.  And, of course, Satan doesn’t fit into this small-minded worldview.  How many kale smoothies do we need to drink to fight a demon?   How many pushups before we’re prepared to war against the devil?  How many books on positive thinking do I need to read or what number of times do I need to vote for my favorite party before Satan is on the run?  These questions are ridiculous because our true enemy is not a “flesh and blood” human, which would be comforting since then he would be as ultimately powerless as we are; no, our true enemy operates in the supernatural reality we want to ignore because it frightens us.  By all means, eat well, stay in good shape, and be prepared for temporal danger, because then you will be more ready to help others in the name of God, but we cannot for a second believe that if we treat these activities like magic rituals they will help us save ourselves or anyone else from an evil whose horror we barely understand.

After all, the Evil One comes in so many different forms. He is as clever as he is destructive and may deploy his forces in open persecution of God’s righteousness, as one would find in North Korea or Iran or China, but there can be little doubt Satan prefers to use subtlety and half-truths to seduce humans into compromising with evil—slowly creating addicts to his counterfeit loves.  Open persecution can be effective, but it also leads to the great witness of the martyrs, and so it is much better to gradually corrupt a people by controlling what they think and do through cultural pressure.  This, of course, is our situation.  No one says we can’t identify as a Christian; rather, we are simply told that to live and be successful in this world, we must prioritize fitting into its corrupt and soul deadening structures. No one says we can’t fight; rather, we are simply told we must lay down the armor and weaponry St. Paul says we must carry to thrive in this dying world. Without those weapons, we may survive the battles which lay before us, but we certainly will not win any of them.  We may limp out of the blood red fields of tomorrow, but we certainly will not have helped save anyone we love from the sucking blackness daily begging us for our souls.

And so, we are called and commanded, for our sake and the world’s, to fight alongside the armor clad warrior God we first meet in the prophecy of Isaiah, “…the Lord saw it, and it displeased him that there was no judgment. And he saw that there was no man, and wondered that there was no intercessor: therefore his arm brought salvation unto him; and his righteousness, it sustained him. For he put on righteousness as a breastplate, and an helmet of salvation upon his head; and he put on the garments of vengeance for clothing, and was clad with zeal as a cloke. According to their deeds, accordingly he will repay, fury to his adversaries, recompense to his enemies.…So shall they fear the name of the Lord from the west, and his glory from the rising of the sun. When the enemy shall come in like a flood, the Spirit of the Lord shall lift up a standard against him” (Isaiah 59:15-19).  Because of our intimate union with Christ—the warrior Messiah who fully revealed His love for us by bleeding for our sins—we are now called to wear the holy amor of God and fight for truth and beauty and goodness until he returns to fully reveal His justice.  We are called to be the living harbingers of the righteousness which will soon rain down upon the earth; we are called to be holy warriors marching together against the evil killing our friends and neighbors; we are called to carry the gospel with the divine strength necessary to turn our cheeks when attacked, give away our cloaks when defrauded, carry our crosses when the enemy screams, “deny God or death.”

Unfortunately, the American church again and again has shown that it is not up to the task.  This week a poll was released by a Christian organization which found that 80% of American Evangelicals will agree to a statement saying Jesus isn’t really God.  This ignorance is what a disarmed church looks like. This is what happens to Christianity when we lose focus on training our hearts and souls and minds to fight in the war between good and evil, when we race to replace the hard, loving work of self-denial, sacrificial worship, and God-focused fasting with weekdays lived for ourselves and weekend churches built to entertain us.  A Christian army which refuses to live in the prayer and sacramental life of the church or daily study its manual of Spiritual truth or prepare in any way for the pitiless onslaught of the enemy will not ever win any battles.

But, it doesn’t have to be this way.  We still have time, because we still have breath, to take up the weaponry of God and train like the lives of those we love depends upon it.  We are not stronger than the devil, but we serve the Lord who has already defeated him.  We are not stronger than the murderous forces of our fallen world, but through our victorious Savior, we are strong enough to daily put on His armor and war against the darkness with the love which shines in the darkness, the love which heals dying daughters, the love which raises dead sons.  Let us then be strong in the Lord, let us pray without ceasing, and let us march against the darkness together.