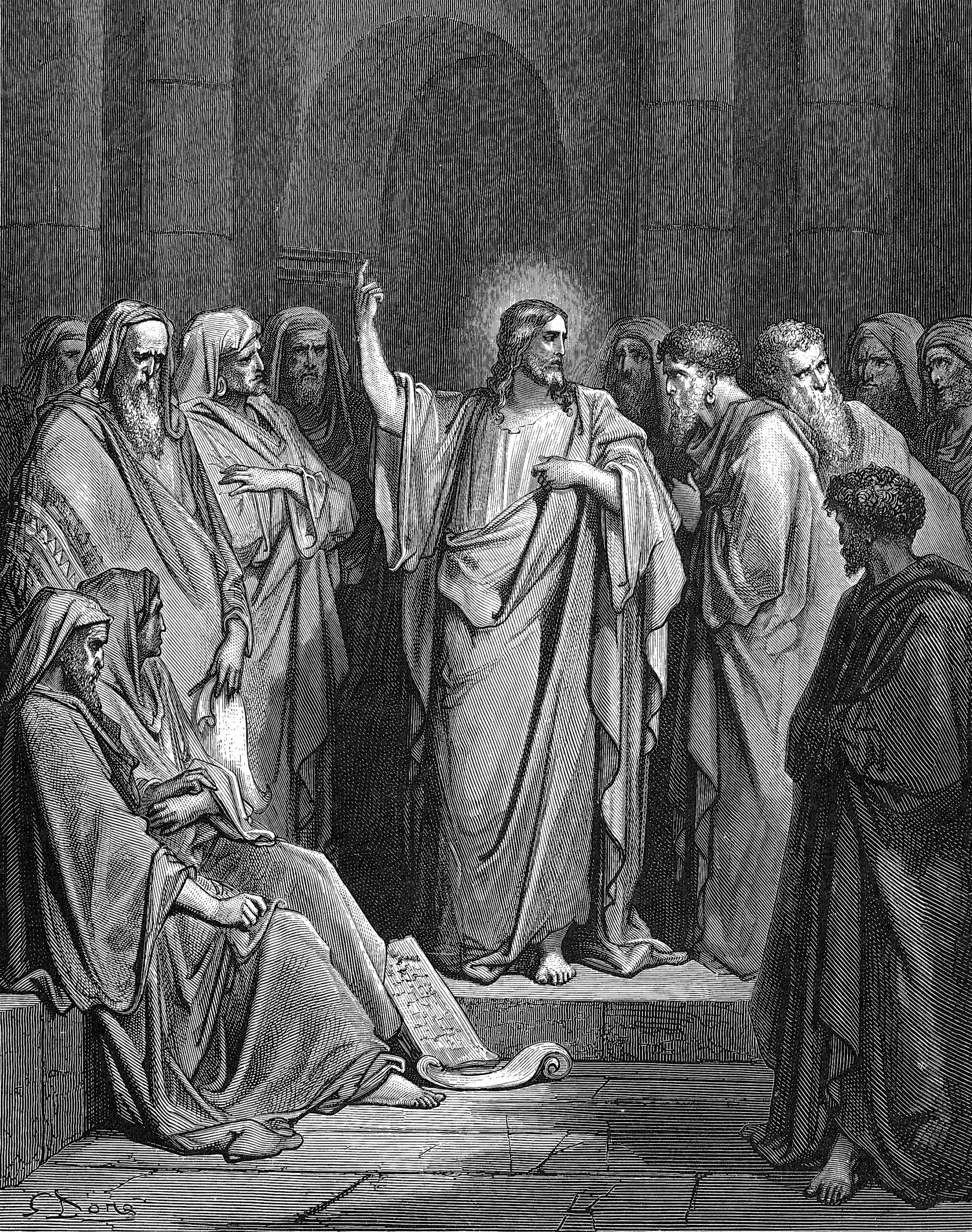 Then one of them, which was a lawyer, asked him a question, tempting him, and saying, Master, which is the great commandment in the law? (St. Matthew 22:35-36).

Today, we are dropped in the middle of humanity’s great opportunity to interrogate his Creator. Earlier in St. Matthew’s account, the Lord was confronted by Satan (the great representative of the angelic rebellion), today He is faced by the religious leaders of Israel (the great representatives of the human rebellion). These two rebel forces, human and demonic—image bearer and traitorous solider—have been allied ever since the first man chose selfishness and sin over communion and life. Ever since this most tragic decision, the default human position has been to join in Adam’s mad rebellion, to join him in asking, along with his unfaithful, demonic ally, “Did God really say?” Of course, good faith questions are not the problem, to paraphrase Anselm of Canterbury, the quest to better know God is “faith seeking understanding,” and inevitably, questions will be part of this quest, but just as we must examine the motivation behind our declarations and rebukes, we must examine why we ask questions. Do we ask questions to better understand a subject or to attack it? Do we ask questions to make ourselves seem more important? Do we not ask questions because we prefer to live in the comforting darkness of our own ignorance? Today’s text drives us to judge our own hearts lest we be judged by God.

Of course, the great tragedy of the three questions asked by the Sadducees and Pharisees is that none of them is asked in good faith, none of them is asked with the reverence and wonder we would hope the representatives of our race would bring to a conversation with God. A few years ago, an excellent movie called Arrival depicted the exceeding challenges of trying to communicate with an alien race of immensely greater intelligence. In the film, the governments of the world bring in linguistics experts to try and understand what creatures capable of intergalactic travel are trying to tell a comparatively ignorant Mankind. Ultimately, the problem lies in the humans who do prove able to understand the aliens but are tragically unable to move past their prior commitments to realities now made irrelevant—ways of viewing the universe no longer capable of being believed. The parallels between this science fiction story and the Gospels are fascinating to consider.

The big difference, of course, between Arrival and the advent of the incarnate God in Jesus of Nazareth, is that the Trinity has done so much of the translation work for us already.  The entire act of the Father’s Son becoming human through the work of the Holy Spirit represents the great translation and accommodation of the divine into a form by which our limited and ignorant race can hear and see and touch the Living God. This great act of rebuilding the link between earth and heaven, God and Man, is more than just a chance contact between two alien races, it is the act of a Creator who loves His creatures. Tragically, our natural response to this enormous act of reconciling love is to hunt for any excuse to question God, or worse, to pile up the stones of our ignorance until we forge some dumb idol to worship instead of the God who has done so much to reveal Himself to us. In our weakness, we want to run from the love which makes our prior commitments to self-love untenable, but God won’t let us. As St. John writes, “In this is love, not that we have loved God but that he loved us and sent his Son to be the propitiation for our sins” (1 St. John 4:10).

It is then God’s love for us which must always go before any attempt to understand God’s law, here summarized by the Sent-One Himself as “…Thou shalt love the Lord thy God with all thy heart, and with all thy soul, and with all thy mind. This is the first and great commandment. And the second is like unto it, Thou shalt love thy neighbour as thyself” (St. Matthew 22:37-39). Just as in His answer to the first two questions, wherein Christ firmly expressed God’s sovereignty over the state and over even death itself, Jesus again makes clear the God ordained priorities of human life. It doesn’t get much clearer than His statement here: the purpose of human life is to adore God and to cherish our fellow man. Do we lose any of that in translation? Is God not clear when He defines the contours of true justice? It isn’t even as if Jesus is saying these commandments for the first time as He is in effect quoting Himself by bringing together Deuteronomy 6:5 and Leviticus 19:18 as the mountain footholds upon which all the rest of the law and the prophets depend. The words couldn’t be clearer or more profound; there are no tricks or gimmicks, just the beautiful and terrible recounting of humanity’s purpose.

I say beautiful because how wonderful would the world be if we truly lived as our Creator commands? It’s difficult even to imagine a world in which our every action was engaged in or preparing for the loving worship of the true God; it’s difficult to imagine a world in which we treated the people that same God puts in our lives as if they were extensions of our own body. This difficulty we have in imagining such a world reveals why the law is also terrible. We live in a society and culture designed around existing in 180 degree opposition to these commands. We are taught to begrudgingly worship God as few times as we possibly can (if at all) and to treat our neighbors as objects to be used for our greater pleasure and comfort. We are inoculated against true love by being sold cheap, counterfeit loves used like plastic labels to get us to buy self-worship and the objectifying of our neighbor or spouse or children.

Of course, it isn’t all bad, we still feel the pull to live for something greater than ourselves; we feel the strange, inexorable need to find a love greater than some uneasy truce between temporary housemates, but the desperate failure of humanity to live up to this burning ideal haunts us at every turn. Here is why we say “Lord have mercy upon us, Christ have mercy upon us” every week; it’s why we should be repenting our sins to God every day; it’s why we must search our lives for more and more opportunities to experience the divine love unwilling to lie to us in exchange for our money; the divine law which must kill us before we can be reborn.

The law then is beautiful and terrible because it shows us what we were made to be but are not. Christ is beautiful and terrible for the same reason, but unlike the law, Jesus has come to open the eyes of the ignorant and break the chains of our oppressors, as He says, “The Spirit of the Lord is upon me, because he hath anointed me to preach the gospel to the poor; he hath sent me to heal the brokenhearted, to preach deliverance to the captives, and recovering of sight to the blind, to set at liberty them that are bruised, To preach the acceptable year of the Lord (St. Luke 4:18-19). Because God the Son became Man, because He jumped into this burning furnace of a world with us, He perfectly understands what it takes to win the great war we are taught to pretend we aren’t fighting. This reality rests behind Jesus’ seemingly strange question to the Pharisees about how could David’s son be his Lord, or put another way, how could David’s offspring be his superior? Not only does Jesus show the impotence of the religious leaders by revealing their inability to answer a basic question about the identity of the Messiah they’re supposedly waiting for (the Messiah who just happens to be speaking to them), but He also moves the gathered crowd and the billions who have heard these words toward the answer to this section’s burning question: “Who does Jesus think He is?”

The answer to that question is the only hope for our fallen world, for Jesus is telling a hostile, unbelieving audience that Psalm 110 is about Him; He is the only one capable of being both the Son of David and David’s Lord because He is both Man and God. And since He is both Man and God, He is humanity’s only chance at redemption and transformation and glory. All of our counterfeit saviors, all the fake messiahs we are instructed to worship will fail us because they share the same fatal human flaw we all do—the same disease which makes children selfish, lovers untrustworthy, and parents disappointing; the same human disease which leads to abandoned children and concentration camps and loneliness and fear. All of it lives within the heart of whatever fake messiah we live for, whatever scared and defeated savior we imitate. Our true Savior sits victoriously above it all: above all the selfishness and pain and ignorance of the human experience; He is enthroned above it all because He has defeated it all. Today’s silencing of the great religious leaders is the first sign of their defeat—of evil’s defeat, of our defeat. The next sign will be the resurrection of the God/Man humanity tried to silence with wood and nails and pain. But, there is no silencing the Living God; no matter how loudly the world screams in its self-inflicted pain, no matter how oppressive our loneliness and fear might seem, no matter what nightmares we conjure in the dark, Earth’s Victor sits on His throne and there is no extinguishing His light.