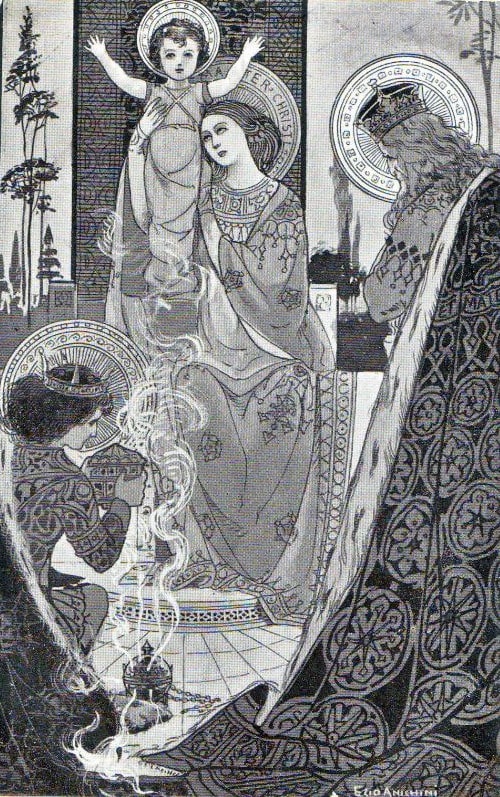 I therefore, the prisoner of the Lord, beseech you that ye walk worthy of the vocation wherewith ye are called (Ephesians 4:1).

There is something truly dangerous and frightening about the great apostle imploring us to share in his walk of imprisoned freedom. Doesn’t Paul know that, according to all the measurements by which men judge one another, he is a living, breathing example of human failure? It’s as if we are being addressed by a defeated boxer—smiling up at us from a ring splattered with his own blood—assuring us he has his opponent right where he wants him. The scandal of St. Paul’s imprisonment and execution, along with the rest of the apostles’ grim deaths, simply doesn’t allow us to blithely nod our heads in agreement to their bold claims—as if it were obvious that a man could be chained up in a Roman jail and be God’s voice to a fallen world. It’s not obvious at all by any standard of fallen men. How much easier is it for us sons of Adam and daughters of Eve to bind ourselves to the powerful: to put our trust in the Roman jailers rather than the jailed apostle? As we all know, it’s quite easy: we do it all the time. We look out into the broken world and evaluate people based on their success in working within the evil systems of cruelty and death which hate God and spit on His disciples, both ancient and modern. Blessedly, we live in a clarifying age, for it used to be that when the powerful crushed the weak they pretended to be good Christians while doing it; now, they rarely even engage in such token hypocrisy; however, the danger to us comes when we get so used to believing the lie that it’s now easier just to keep on believing.  We say, “Sure he beats his wife, but he entertains me, so deep-down he must be a good person,” or “Sure she’s a selfish monster but she hates the same enemies I do so deep down she must be a good person.”  St. Paul is telling us today that there is no such thing as a “deep down:” there is only those who have compromised with the world and those fighting to the death. If we find that hard to swallow, let’s ask ourselves a couple of questions: Why do our world’s heroes not look like the beaten and jailed and murdered apostles?  Why do our world’s heroes look nothing like God on a Cross? The short answer is that prisons don’t celebrate the men and women who have escaped their walls, just as this broken world doesn’t celebrate the men and women rescued from its dungeon of sin and selfishness and death. Why would it?  For every man, woman, and child saved is another reminder of the world’s ever-nearer destruction and rebirth—the dawn of an eternal justice no amount of money or cruelty or power can prevent.

So, when St. Paul speaks of himself as, “the prisoner of the Lord,” he wears this affliction like a badge of honor, rejoicing in the God who has already defeated Satan: the prison warden of the mad world raging all around us. It is Lucifer’s inward facing, self-love which propels his great angelic rebellion, setting the tragic pattern into which our evil world falls again and again and again. We are drawn to seek temporary glory, conditional love, and corrupting power like men pouring buckets of salt water into their mouths to satisfy an unquenchable thirst. In fact, it’s worse than that because at least if we were bobbing up and down in the water, the last survivors of a great shipwreck, we couldn’t pretend everything was going great; we couldn’t keep up the insane facade of personal control and sovereignty we all too easily embrace in a world addicted to falsehood and fear.

The church, on the other hand, is meant to be a lifeboat picking up men dying of exposure and thirst, dying of selfishness and greed, dying of loneliness and despair, but what happens when the church simply joins the choruses of the damned? What happens when the church forgets that her job is to drag the unwashed, sun-crazed victims of this world into her nurturing community? Well, people die.  When the church becomes a social-club or a political action group or anything other than the other-worldly, sacrificial community described by St. Paul today, people die.  That’s why it’s worth it to go to prison if that’s what it takes to preach the gospel, that’s why it’s worth it to be go without so that others may survive, that’s why it’s worth it to assassinate our pride in public acts of loving obedience to our Savior. We have been saved for a purpose, or we haven’t been saved at all; we are either in the boat groping for an oar through tears of gratitude, or we are still in the dark water barely keeping ourselves afloat.

So then, if we are Christ followers there stands our calling, and it is precisely this calling which St. Paul beseeches us to trust above all else.  Why? Because this call comes from the God who saves the wounded and the lost.  As we read in St. Paul’s letter to the Romans, “And we know that all things work together for good to them that love God, to them who are the called according to his purpose. For whom he did foreknow, he also did predestinate to be conformed to the image of his Son, that he might be the firstborn among many brethren. Moreover whom he did predestinate, them he also called: and whom he called, them he also justified: and whom he justified, them he also glorified” (Romans 8:28-30).  Our true summons to sacrificial, cross shaped love is the calling which connects us into the eternal, indefatigable purposes of the Triune God. We did not call ourselves to salvation; no, God reached out to us while we were rebellious, while we were covered in the lies of this world. God called us and saved us and recruited us into the army of light and truth and goodness. And, this calling comes not from fallible, imperfect men—ready to betray us when the going gets tough; no, God is His unchangeable sovereignty called us, and so we can trust His Word as we march off into daily battle. As St. Paul says, “If God be for us, who can be against us?” (Romans 8:31).

But, some reasonable questions might be asked, “How do we know that God is for us?” How do we know God isn’t just commanding us to embark on a suicide mission for His own questionable purposes? How do we know it will be worth it to lay our hopes and dreams and desires and fears and time and treasure on the altar of sacrificial love? In short, how do we know God is good? Those questions are quite reasonable; one could look out at the world and very easily find terabytes of evidence to support the commonly held opinion: God is evil and cruel. Just last Thursday, I watched a short video of a Kurdish woman holding her two murdered children—rocking them to sleep for the last time as Turkish troops coldly and methodically exterminated her village. It would be so much easier for me to blame the death of these beautiful children on God rather then to look in the mirror and admit my own part in their deaths, to face the stark reality of how many times I have chosen sin and death over righteousness and life, how many times I would have chosen to murder those children rather than lose access to my favorite sin. 10 times? 100 times? What if I don’t have to see the children’s faces when they die, could I still have my sin? The more we go down this road, down the honest path walked by those who worship the Way, the Truth, and the Life, the more we recognize how typically human it is to blame the God mercifully holding back the waves of His incoming justice until His lifeboats of infinite mercy are filled; how human it is to blame the God who gave us the miracle of life only to watch us stamp out life at every turn; how human it is to blame the God who gave us His perfect Son only to watch us try and murder love on a Friday afternoon.

Here lies the ultimate grounding of our calling, the ultimate reason for our trust in God’s goodness and mercy: the life, death, and resurrection of Jesus Christ. God the Son walked among us in perfect humility and gentleness and patience, bearing the great weight of human failure in such a way that God’s saving love was put on display for all ages. Our God does not simply order us into the fray; no, He went alone into the darkest parts of humanity’s brokenness only to emerge victorious over sin and evil and death. What prison can scare the faithful follower of the resurrected Messiah?  If death was unable to break the God of Love than what fear or idol can conquer those who have been baptized into His death? What enemy can defeat a church united to everlasting life by the Holy Spirit? All these questions find their answer in the God/Man now seated on the heavenly throne: “The Lord said unto my Lord, ‘Sit thou on my right hand, until I make thine enemies thy footstool.’” We can be sure of our calling because our Lord sits on the throne of accomplishment, the throne of “It is finished.” We then follow in His suffering because we are witnesses to the redemptive power of sacrifice against an evil world. To avoid the suffering of sacrificial love is not to choose an easier path to salvation; it is to renounce the triumph of God just when we can hear the victory parade coming around the corner.

And so, St. Paul can tell us to stand together against the the combined forces of evil because in our united humility we are exalted in and through our Lord; in our daily death for God and one another we lift His Cross above our heads as the great answer to the question, “Is God good?” When the church locks arms and hearts and souls around the truth of God’s righteousness, made manifest in Christ and His Church in Word and Sacrament, we join with our Savior to call mankind to the new and everlasting way of being human.

We don’t need to be heroes, the Son of God has already saved the day.  We just need to hold on to our calling, hold on as every part of our fallen world—every malevolent force and temporary distraction and misused love—tries to rip our calling from our grasp and give us back nothing in return.  Nothing, that is what we have if we have not the One Body, One Spirit, One Lord, One Faith, One Baptism uniting us to the one God and Father of all—who is above all and through all and in us all.  If we have that we have everything.  Let us pray that we never again settle for less than everything.