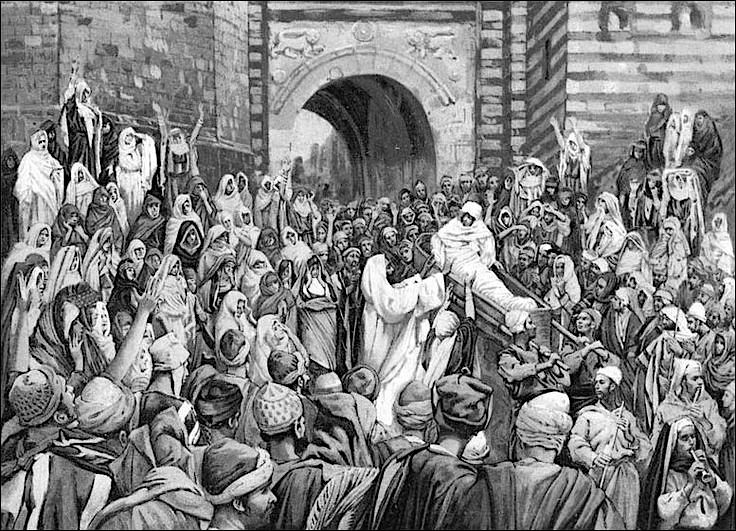 And when the Lord saw her, he had compassion on her, and said unto her, Weep not. And he came and touched the bier: and they that bare him stood still. And he said, Young man, I say unto thee, Arise. (St. Luke 7:13-14).

It’s difficult to imagine the emotions which must have flooded the hearts of all those who saw Jesus restore life to this widow’s only son. We’ve all been to funerals, but none of us has been to a 1st century Galilean funeral. There would have been professional mourners wailing away while musicians played familiar melodies designed to help cover up the sorrowful cries of the broken woman leading this black parade through town.  The entire village would have processed together as they moved outside the city to the family’s burial cave—the place where the widow’s husband, her son, and one day, she too would succumb to the final indignities of mortality.

We should take notice of the elaborate ritual within this death march our Lord crashes into. People take comfort in rituals; they provide order and connect us together even while decay and death conspire to drive us apart. It is no accident that the modern banishment of established ritual in favor of constant, numbing entertainment has contributed to the alienation which surrounds us: a condition the damned blindly hope will be cured by more vigorous sacrifices to the idols of sex, money, and power. But, this ritual of burying a clothed person in a tomb spoke to a hope still burning in the hearts of God’s people: the hope of resurrection—the hope that one day God would reassemble and revive His immortal image bearers broken and bloodied but only temporarily destroyed by the fallen world and its idols. This was the hope of Joseph when he made the sons of Israel swear to take his bones back to the promised land (a promise Moses solemnly fulfilled); this was the hope of the prophets, as Isaiah writes: “Your dead shall live; their bodies shall rise. You who dwell in the dust, awake and sing for joy! For your dew is a dew of light, and the earth will give birth to the dead” (Isaiah 26:19). The solemn hope of the men and women preparing to lay the widow’s son in the cold earth was that this same earth would one day give birth to God’s new creation. But, while this hope lay at the heart of the funeral, we cannot forget the grim, daily realities of a people who possessed precious few resources for fighting back against the death tide. These men and women were not ignorant rubes. They knew, much more than us, what it took to survive in a cruel and unforgiving world. They knew that the fallen world takes and takes and takes until we can’t give anymore. And so, they marched in sadness to the city gate again and again until one day it would be they who were carried out of it.

The actions of Jesus, interrupting this ritual of mourning, are then quite terribly cruel if not for the fact that He is the One who created life in the first place, and further, He has come to birth the new world from His own body and blood. Telling a grieving widow to “Weep not,” while pushing past her to touch the unclean death box being purged from the village; thereby, making Himself unclean in the process—all because he had compassion on this grieving widow—gives us a window into God the Son’s entire mission to save the world. As St. Paul tells us in his 2nd letter to the Corinthians: Jesus, who knew no sin became sin for us, so that we might become the righteousness of God. Jesus embraces death itself so that we can be freed from sin and death in a transformation just as shocking and incredible as compelling a dead boy to return to his mother’s side. Through the Cross, our Lord covers Himself in the unclean death acts of the world, for on the first Good Friday, Jesus will literally take this boy’s place in the tomb and cause His own blessed widowed mother to grieve as humanity rips her precious and perfect son apart. Here is the great and terrible price of the end of death—the price of wiping away all tears, the price of saying “Weep not.” Justice demands a sacrifice; Love provides a Savior.  God has compassion on His rebellious, dying people, and so we are no longer merely hopeful of salvation, we are assured of it by faith in the Messiah who secured it. This new reality should be stirring in our hearts when we hear those words, “Young man, I say to you, Arise.” When Christ heals a leper or walks on water or brings a dead boy back to life, He is not upsetting the natural order of things; He isn’t breaking the rules of an ordered universe.  No, God is the ultimate source of the universe’s order, and so when either a prophet in God’s name or God incarnate reverses these seemingly natural ailments of sickness and death—our eyes are suddenly opened to just what it will look like when the still beautiful but broken nature of our world is reordered away from sin and decay and death. The Christian now living in the new world already made visible by Christ and His church daily feels this unbearable tension between the way things have seemingly always been and the way God is now recreating them to be.  The Christ follower will constantly find himself at odds with both the forces of progressivism and conservatism because these man-made ideologies can never approach the alien glory of God; they can never approach the new traditional and revolutionary order we must submit to rather than command.

This idea of the Gospel upsetting the rituals and ideologies of our fallen world made me think of a moment which occurred in 2019 but has stuck with me ever since. On a Wednesday afternoon, in a courtroom in Dallas, one of our last remaining solemn rituals came to its conclusion.  A police officer named Amber Guyger had just been declared guilty of murdering a man named Botham Jean in his own home. The sobbing woman was given her sentence in the ceremonial reverence which once used to be shared with mainstream Christian worship.  People know fear in a courtroom in a way they rarely do in the unserious churches which dot our land these days because, in a courtroom at least, the people respect the judge and viscerally fear his power over them; it’s the same fear the Galileans felt when Jesus brought that dead boy back to life.  But, on this day, during the impact statements from those who had just lost their loved one, Botham’s brother Brandt shocked the nation by upending everything we have been taught to expect in these moments of public pain. Rather than scream and rage and revel in the punishment of another human being, a miracle occurred in that Dallas courtroom: Brandt preached the Gospel to his enemy. He said, “…I forgive you. And I know if you go to God and ask him, he will forgive you…I love you…I want the best for you, because I know that’s exactly what Botham would want you to do. And the best would be: give your life to Christ.” And then, Brandt asked the judge to allow him to hug this woman who took his brother from him.  The judge said, “Yes,” as she wiped tears from her eyes. Finally, incredibly, Brandt embraced his brother’s killer, and we all were able to see, if just for a moment, the glory that is coming when the sons and daughters of righteousness forever rule the redeemed universe. Thinking back to this event with this week’s Gospel reading rolling around my head, I came back again and again to the words of Christ both here and throughout the Gospels—words that are cruel and evil if they are not true. How dare Jesus offer forgiveness and love and new life to me a sinner, unless it’s all true. How dare He give me hope when every part of me just wants lies, unless it’s all true.  How dare he take away my right to revenge and victimhood, unless it’s all true. Of course, Jesus doesn’t just hold out blind hope to me or you; no, He makes hope real by dying and rising Himself; He makes the sacrifice and forgiveness of Brandt the only reasonable response to a world forever changed by Christ’s triumph over sin and selfishness and death.

During the week I looked back at various social media postings and reactions surrounding the event, unsurprisingly, people on both the left and the right came out to attack this young man for his witness in that Dallas courtroom. He was called everything from an Uncle Tom to a moral coward, but the most prevalent criticism leveled against him was that his forgiveness wasn’t fair. The self-righteous of every stripe screamed it wasn’t fair to forgive this woman: she should be forced to suffer before we decide she is worthy of forgiveness. Implanted in all of this criticism is an unspoken creed of the self-righteous soul: “I need this woman to suffer more than I suffer in my own life or how else will I know I’m better than her?” What would be St. Paul’s answer to this small and sad way of looking at what it means to be human? Well, as he writes in Galatians, “I have been crucified with Christ. It is no longer I who live, but Christ who lives in me. And the life I now live in the flesh I live by faith in the Son of God, who loved me and gave himself for me” (Galatians 2:20). If we are the reborn, regenerate children of grace, than—to the exclusion of all else—we are the forgiven and resurrected ones. None of that happened because of anything like our disfigured concept of fairness.  It isn’t fair that God the Son had to die for His creation; it isn’t fair that this widow’s son was revived while millions of parents have to keep walking to their children’s graves; it isn’t fair that Brandt had to hug his brother’s murderer instead of his beloved brother, but it is in those spaces of deep and terrible unfairness where we can actually experience the reality of God’s grace; it is there where we find that grace is infinitely superior to what men call, “fair.”  In these trials we find it is one thing to say, “I am saved by grace alone;” it is entirely something else to live and die in that Cross shaped truth as the fire burns all around us. If you are a Christian, living in the truth is your blessedly unfair calling. A fair world ends with the last two humans murdering one another in the dark; the unfair world of divine grace ends death forever.

And so, we pray along with St. Paul, during his unfair imprisonment, that the Holy Spirit would empower us to root and ground our faith in the love Christ showed on the Cross, for it is only then that we and all the saints can begin to comprehend the breadth and length and height and depth of the divine love which surpasses all of our knowledge. A love which returns sons to their mothers, frees humanity from the slavery of revenge, and prepares us all for the glorious grace soaked world to come.