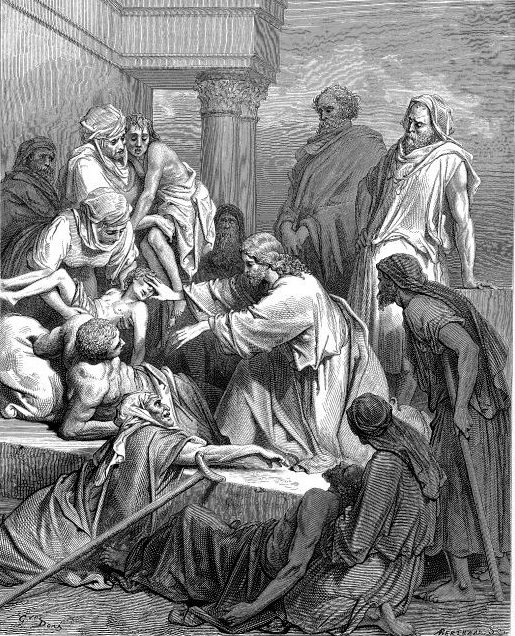 And that ye put on the new man, which after God is created in righteousness and true holiness (Ephesians 4:24).

In today’s epistle, St. Paul delivers his own personal “state of the nations address.”  He uses the word, “Gentiles,” (which means the nations or the peoples) to describe all those outside of the eternal priestly kingdom which is every Christian’s true home.  The borders of this new cross-shaped nation stretch through time and space, enfolding all those whose freedom was won at the Battle of Calvary.  It is a nation for all the reborn men who await their true capital city: the new Jerusalem fashioned by God Himself.  This city St. John saw in his exiled revelation will soon descend from Heaven—ushering in the perfect justice our flawed leaders are incapable of enacting.  St. Paul, himself suffering earthly injustice, reaches out from his imprisonment to remind the saints—then and now—who they are, and what they are becoming in stark contrast to the Gentiles for whom evil has become a way of life.

We should be struck by how offensive this letter would have been to the Gentiles.  After all, Paul calls them ignorant, blind fools whose calloused hearts now embrace the darkness which gleefully smothers the good wherever it can.  Any Gentile hearing these words surely would have felt deeply insulted and been inspired to defend their heritage. Is Paul being unfair?  No, Paul is simply and uncompromisingly presenting the facts of the case: if God the Son has become a man to die on a cross in order to reveal the love and righteousness of God, than anyone who turns away from this perfect love and unmerited grace has revealed a dead heart in their chest.

We might, however, be tempted to think Paul is only condemning the savage heathen of his own age: the people who executed disobedient slaves on crosses and considered raping and pillaging a reward of the soldier, but who wouldn’t substitute the sublime reasoning of the 1st century pagan Stoics over what passes for discourse today.  Take Seneca (who died 30 years after our Lord): “Anger [is] a short madness: for it is equally devoid of self-control, regardless of decorum, forgetful of kinship, obstinately engrossed in whatever it begins to do, deaf to reason and advice . . . and very like a falling rock which breaks itself to pieces upon the very thing which it crushes.”  After spending the last few years watching grown people scream and yell and cry about politics, we should be well cured of any snobbery for our supposed modern enlightenment.  No, the tears and rage and pain and lies on display in our deteriorating political culture are merely the symptoms of a spiritual blindness which imagines that the temporary things of this world are of ultimate importance.

This blindness has always afflicted the Gentiles.  As St. Paul tells us in a parallel passage in Romans, “Claiming to be wise, [the Gentiles] became fools…they exchanged the truth about God for a lie and worshiped and served the creature rather than the Creator, who is blessed forever! Amen. For this reason God gave them up to dishonorable passions” (Romans 1:22,25-26).  In short, when evil seems to win in this world, it isn’t because evil is more powerful than the good; no, it is because God is allowing the damned to experience Hell on earth by giving them what their disordered minds most want.  For us, it is easy to see this worship and service of the creature on display in those who will sacrifice everything to defeat their political opponents, but it is also on display in those who sacrifice everything for sex or money or any of the other created things dead hearts desire instead of God. Worse, it is also certainly on display when those called to be saints allow their “walk”—their speech and actions—to be mirror images of their Gentile neighbors.  For example, If we have talked more about our favorite politician this week than Jesus, this rebuke is for us.  If we have talked more about our hobby this week than Jesus, this rebuke is for us.  If we have worshipped and served anything other than our Savior and King, this rebuke is for us because who we worship and serve is merely a reflection of who we really believe will save us.

St. Paul has no doubts about who can actually save us, and so he shouts at the church through the pages of his letter, “But, that is not the way you learned Christ!” (Ephesians 4:20).  He tells us the truth is in Jesus, and we must be clothed in the new humanity Jesus first presented to the world.  Entrance into this new life begins with our recreation, our spiritual rebirth by the Holy Spirit, which is the guarantee of our our whole body resurrection on the last day.  In light of this regeneration, in light of our old selves being buried in the waters of baptism, we now embrace the grace of God which called us from lives of darkness and death into lives of light and life.  The tension in the passage comes from the continual nature of this putting off and putting on analogy Paul uses, but just as the apostle can use the word “save” to mean a past, present, and future event or call believers “saints” while commanding us to pursue sainthood, here again—especially when we compare Ephesians 4 and Colossians 3—Paul can lay stress on the permanent nature of the change which God has wrought in a believer and admonish believers to be renewed in the knowledge of that indelible transformation.  Through the church, the Holy Spirit daily renews our minds through Word and Sacrament so that we can recognize our new faces in the mirror; He drags us away from the grave where we buried our old selves so we can know and live as the new creatures we are: remade after the likeness of God in true righteousness and holiness.

And so, it is with Spirit renewed hearts and minds and bodies that God teaches us how to truly live.  Freed from every lie our world tells us, freed from the false priests who seek to rob us of our destiny by making us bend the knee to their soulless death cults, we can live with an eternal purpose greater than ourselves or the small, dying men who ask us to join them in their slow-motion suicide.  We can be honorable and just in an increasingly dishonorable and unjust world because we are no longer slaves to the illusion that we must build heaven with our own two hands or that we must forge it from the tears and broken bodies of our enemies.  God has already created heaven, and He is bringing it to an earth near you.  Saving the earth is not our job; it was already saved when the young King of the universe climbed on a cross and bled for it.  We are not the heroes of the story; we are not Batman (at best we are the policeman who says, “Wow,” when Batman saves the day, or perhaps the criminal saved from a life of crime by the intervention of a force he cannot resist).  The humility to see this truth is a gift we should be praying for every day because this gift prevents us from becoming the very monsters we wish to slay, and it frees us to focus on on our actual mission: to love God and our neighbors.

This humble focus we are called to bear explains the commands St. Paul lays upon us today.  If we are not the ones who will save the world, we must become the pure instruments of Him who has and is and will.  When we, through Word and Sacrament, become more and more united with the true Savior of the world we can actually experience the righteous anger He feels towards sin but stop that anger from causing us to fall into the sin we hate.  As the pure instruments of God, we can flee from sloth and greed so that our work is transformed from soulless drudgery or gluttonous hoarding into the means by which God helps those in need.  As the pure instruments of God, our very words move from gossip and useless small talk into a conversational pathway by which the grace of God unlocks the hardened heart of another.  Every day the Holy Spirit is moving us farther and farther from the purposeless waiting the heathens call “life” into the mighty, rushing currents of the glorious purposes of God.  Each moment, including the moments of our greatest pain and sadness, is another blessed opportunity to further and further align ourselves with God’s saving activity in the world.  When we walk in this manner, when we walk as Christian men and women, we become the living ambassadors of God’s forgiveness and love to a lonely and desperate world; we live in the forgiveness that costs and changes and saves.

And so, whether we are 9 or 90, it is always time for us to wear the new humanity Christ died to give us.  Today and every day, let us wear the righteousness of Christ, and let us joyfully live lives of purpose and meaning and truth.