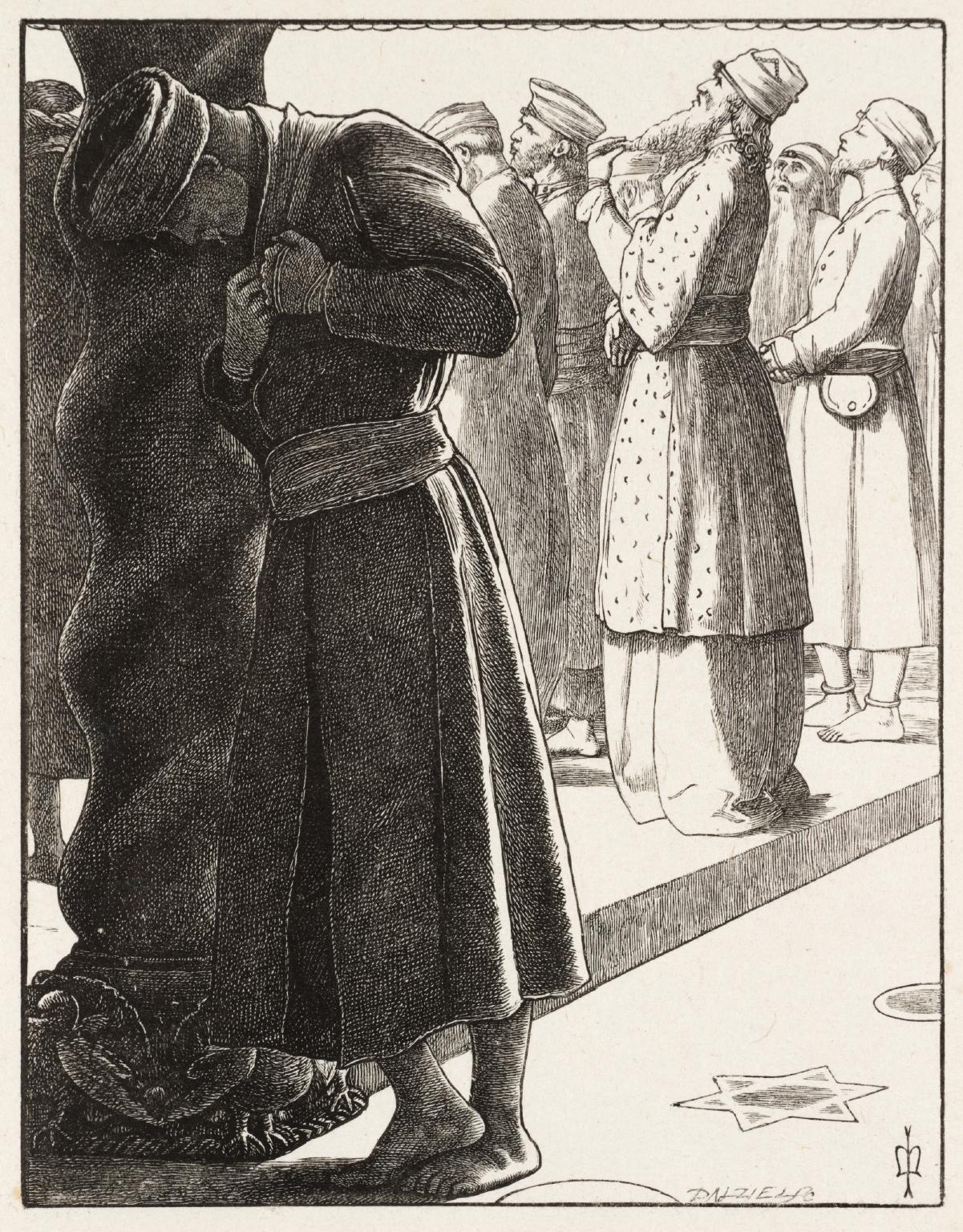 We are told that the target for today’s parable are those who “trusted in themselves that they were righteous, and treated others with contempt” (St. Luke 18:9). The Pharisees, famous throughout history for their painstaking adherence to Jewish tradition, are the group most often under fire in the average parable from Jesus (as they are today), but this focus should not lead us to falsely believe the Pharisees were uniquely evil or even the worst religious group in 1st century Judea.  The Sadducees, who denied the possibility of resurrection and the authority of the prophets, were much worse, and what about the Zealots whose terrible hubris caused them to lead countless thousands to slaughter by instigating a mad war against the Roman Empire—a war, as we saw last week, which brought the judgment of God against the rebellious and the damned.

It is in fact the Pharisee’s closeness to the truth which makes them those most often called to repent at the end of Christ’s parables. As the Pharisees believed, God does want us to be obedient, and they were even right that the world will be saved by obedience, but what the Pharisees had failed to acknowledge was the radical sinfulness which tainted all their attempts to be the good people whose obedience would save the world. As St. Paul, the former Pharisee writes, “But whatever gain I had [as a Pharisee], I counted as loss for the sake of Christ. Indeed, I count everything as loss because of the surpassing worth of knowing Christ Jesus my Lord. (Philippians 3:7-8). Knowing Christ, changed St. Paul from a “Pharisee of Pharisees” into the penitent, humbled man who walks away justified, and in today’s parable, our merciful Lord wants all men to see that the outward signs of religious or cultural holiness are nothing if we too are not united to the holy one of Israel.

To help us fully picture the scene our Lord is describing, we should imagine the temple itself and the cycle of prayer within where the Pharisee and tax collector would present themselves. At 9:00 a.m. and 3:00 p.m. the people would gather in the temple for the Tamid or whole sacrificial offering service: praying together and waiting for the priest’s blessing upon them. We still see this pattern of prayer in Anglican churches where we offer the daily sacrifice of praise and thanksgiving through Morning and Evening Prayer—services which feature both a confession and a priestly administered absolution of our trespasses forever linked to Christ’s sacrifice for our sins, once offered. The setting than for the parable is very important because it magnifies the enormity of the Pharisee’s mad self-righteousness and reveals the true nature of the penitent tax collector’s request.

As Jesus does, we start with the Pharisee who is in the wrong today not because he takes his religion seriously, but because of why he does. He serves as the great example of the man or woman who imagines themselves to be righteous, but whose self-image is at odds with God’s judgment. The tragic state of the Pharisees was accentuated by the addition of man-made ordinances tacked on to God’s law thereby creating an artificial system by which one could evaluate oneself against others. We, of course, do this all the time. Simply asking someone if they are a good person will elicit all sorts of accomplishments and indictments of other types of people which are far worse than anything today’s Pharisee would claim. People will say, “Yes, I’m a good person because I vote the right way,” thinking in the their minds: (thank you God for not making me like the person who votes differently than I do), or they will say, “Yes, I’m a good person because I’ve never killed anybody or robbed a bank,” or “Yes, I’m a good person because I pay my taxes, live a respectable middle-class life, and don’t bother anyone,” and on and on and on. Just like the Pharisee’s boasts, many of these boasts are virtuous and admirable, but none of them closes the massive chasm which exists between our unholiness and the holiness of God: none of them reverses the fall, and so none of them make us righteous in the eyes of God.

Given this reality, the only reasonable thing for a Christian to say when asked if he is good is this, “I am not a good person, and it is only by the blood of Christ and the power of the Holy Spirit in my remade heart that I do anything good or righteous or true.” A statement such as this one would merely be a paraphrase of our Collect for Trinity IX: “Grant to us Lord…the spirit to think and do always such things as are right; that we, who cannot do anything that is good without thee, may by thee be enabled to live according to thy will…” But, we tend not to want to recognize this reality because it requires the kind of public honesty and humility displayed by someone like today’s traitorous tax collector. Jesus loves to make his audience uncomfortable by revealing true divinely gifted righteousness in people who would normally repulse us. To get a sense of what the original hearers felt we would have to replace the tax collector with something like a Nazi collaborator or some other kind of vicious traitor, for the role of men like the one described today was to find and collect the treasures of his own countrymen and give them to the occupying Romans (while also taking a healthy percentage off the top). The tax collector of the parable knows he stands guilty in the eyes of God and cannot even bring himself to move from the outer court of the Gentiles into the space reserved for God’s chosen people. He recognizes his utter estrangement from God, and he knows he must be carried back into a saving relation with Him. Here we should feel the full weight of his pained cry, normally translated, “God, be merciful to me, a sinner!” Interestingly, the Greek verb used here is the same as that used in Heb. 2:17, where we read, “Therefore [Jesus] had to be made like his brothers in every respect, so that he might become a merciful and faithful high priest in the service of God, to make propitiation for the sins of the people.” Mercy is certainly an aspect of propitiation, but what the tax collector needs much more than the kind of cheap mercy the unjust bestow at will is to be relieved of the just wrath of God; he needs an atonement which he can never provide: a sacrifice for sin no amount of Pharisaical “good deeds” can ever replace or equal. He is saying, “God, make atonement for me because I, a sinner, cannot do it myself.” He is calling out from the parable to the God/Man who is telling us this story; he is calling out to Jesus: the high priest who will sacrifice Himself for the repentant traitors and defeated rebels who even now are being prepared to populate the new heaven and new earth.

With this reality made known to him, St. Paul can renounce not just his vices but his actually virtuous life because it is nothing, or as he puts it, it is “dung” in comparison to the loving, obedient sacrifice God the Son made on the Cross. Dung. We should remember that word the next time we go to a funeral, and the derelict preacher regales us with tales of how great the deceased was. He wasn’t that great, but Christ is, and so we have hope—every other hope is a lie.

And so, St. Paul desires that we have the faith of the repentant tax collector who knows, down to the bottom of his heart, that his only hope is the atonement Christ made on the Cross. As he writes,  “[I have given up everything]..that I may know [Christ] and the power of his resurrection, and may share his sufferings, becoming like him in his death, that by any means possible I may attain the resurrection from the dead” (Phil. 3:10-11). The false holiness the Pharisee uses as a weapon against God and his neighbor is made meaningless when God reveals true holiness in the sacrifice of the Son. Resurrection, the new heaven and new earth, the Kingdom of God are not for those who try and justify themselves with money or power or fame or respectability or religiosity but for those who have followed Christ in His war against sin, the flesh, and the devil even to the death—always to the death.

But how? How can we possibly keep fighting in our weakness and our fear, keep fighting as more and more pieces fall off of us and the losses pile all around us; we can keep going because of what St. Paul says next, “..I press on to make it my own, because Christ Jesus has made me his own” (Phil. 3:12). It is, once again, the One who tells today’s parable who makes all things new and possible; it is Christ who transforms the cries of the truly penitent man into the first words of one truly free: a new creation finally able to raise his eyes to heaven as he carries his own cross to the next battle, the next sacrifice, the next chance to show thanksgiving for the One “whose property is always to have mercy.”

It is only in the service of Christ that our works can rise above insane boastings or manipulative power grabs—transformed through Him into the meaningful sacrifice of ourselves: the sweet smell which fills the heavens and pleases the divine.  It is only in Christ that we can live in a fallen world which would make us all tax collectors and harlots.

As we see, we are not worthy of the grace which makes us free and alive, but let us spend every day living as one of Christ’s own, as one who in return for hate and rebellion has been shown mercy and love—infinite mercy and love.