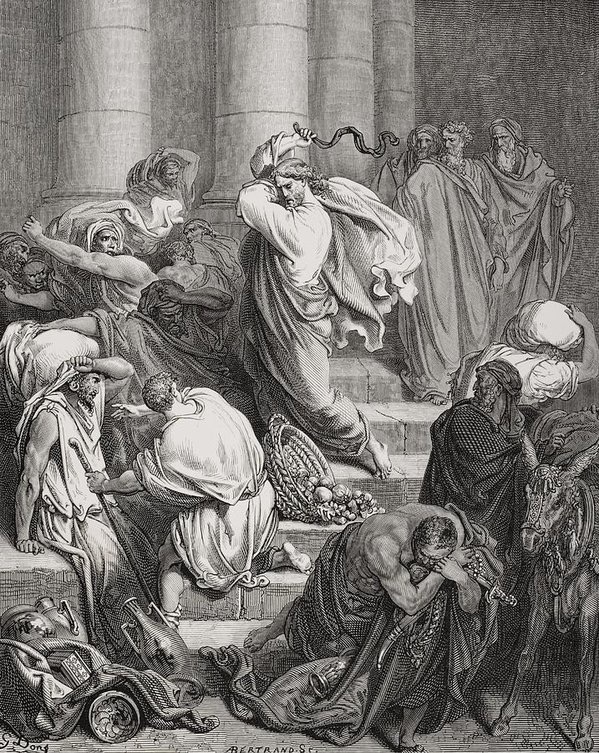 And when he was come near, he beheld the city, and wept over it, Saying, If thou hadst known, even thou, at least in this thy day, the things which belong unto thy peace! but now they are hid from thine eyes (St. Luke 19:41-42).

Gods aren’t supposed to cry. Certainly, the gods invented by men don’t cry. These false gods are made up, and so they can only ever be conjured from the limited imaginations from which they arose—all they can ever be is an idealized or “super” version of the story teller. Thor is big and strong, smashing things with a large hammer; Zeus throws lightning bolts and ravages women; the god of suicide bombers promises 72 virgins in the after life. Who are some other gods? Most American Christians worship a Jesus who thinks and acts just like they do; Agnostics worship an all powerful god conveniently unable to reveal Himself in any way that would change the course of their live; Atheists worship themselves. All of these false gods are the creations of men, and so, of course, our fallen fingerprints are all over them. Today’s revelation of deep emotional pain in Christ Jesus as he triumphantly rides into Jerusalem is not how any human would imagine this story. It would be like Superman breaking down in the middle of a parade honoring him for saving New York: condemning the city he came to save in between sobs. No movie writer would construct a scene like that because he wouldn’t want to remind his audience that there will one day be a reckoning for all the evil masquerading as good in our world, all the evil we invent super heroes to help us forget. Jesus is not a super hero; He is real.

This realness must have been terribly unnerving for the crowd which had gathered to celebrate the great teacher and prophet who now finally seemed to be embracing the messiahship which would lead to Judah’s deliverance, Judah’s salvation. Cheers of “Hosannah,” palms lifted in the air, and garments thrown on the ground were all signs of wonder and hope that Israel’s great king had finally arrived to push the Romans into the sea and end the great exile of God’s people from the Holy One of Israel. So, when the hoped for messiah breaks down in tears, overcome with emotion as He promises terrible judgment upon what should be God’s capital city, we must recognize how shocking Jesus’ actions truly were. Warlords murder and rape so that fear can act like a kind of buffer between their real weakness and the perception of godlike power. Politicians try to convince us of their strength by acting tough or rolling their sleeves up to show they mean business; when in reality, their actual strength only comes from those who believe in the fantasy they’re selling. Jesus has no need to put on an act because he’s not trying to capture territory in central Africa nor is he running for president: the rightful King of the universe isn’t running for anything because we are much, much too sinful and selfish to ever vote for Him.   We know this empirically, for when given the chance to voluntarily crown Christ king, the greatest political power the world had ever seen and the greatest religion the world had ever known came together to murder the universe’s only hope with wood and nails. One can be sure a similar fate would have awaited the Prince of Peace if His public ministry had coincided with the next presidential primary.

It is this tragedy of human nature which drives our Lord to weep when he sees Jerusalem, to weep when He considers the great potential of humanity made dirty and small and horrible by sin, the flesh, and the devil. He knows what we are about to do to Him, He knows the bottomless depth of human depravity, but instead of fleeing or murdering His way to some throne or even just raising up another people, He continues to walk toward the cries of “Crucify Him, Crucify Him,” trusting in the love of His Father and the truth He has come to reveal about suffering and death. The tears of Jesus show us the reality of the stakes—Jesus is serious about the world-saving judgment He will bear and the world-saving judgment He will bring—but these tears also show us that judgment is never gleeful; it is never a happy event when humanity is given everything it asks for until it chokes on it; it is never a happy event when a human person discovers, too late, that the righteousness he ridiculed his whole life was the answer to his every hope and fear. Through Jesus Christ, through God the Son made flesh, Jerusalem is being offered peace; it will instead choose war. There are terrible consequences for that choice in A.D. 33, there are terrible consequences for that choice in A.D. 2021.

But, before we go on, we must nail down what exactly Jesus means when He uses the word, “peace.” This peace only makes sense if we know, down to the depths of our souls, that true peace can only come from reconciliation between God and Man, between Creator and creature. As St. Paul writes to the first Roman Christians, “Therefore, since we have been justified by faith, we have peace with God through our Lord Jesus Christ” (Romans. 5:1). Peace with God is the transition from the just, cleansing wrath of God to the incalculable, immeasurable grace of God. God the Son walked among the children of men to show us all what a life directed toward true peace would look like, but again, an example is simply not enough for us; particularly, when truth and goodness and beauty are so foreign to our fallen senses. Again and again, humanity has been given examples of God’s righteousness, whether through the law or, finally, through God Himself walking among us, but the human response is to abandon our true humanness as revealed by the God who made us to become instead like the brute beasts we should be protecting and ruling. Of course, it’s easier to act like a pig than a man, but that can’t be the way to be more human. Of course, it’s easier to scream and fight and claw and horde, but that can’t be the way which leads to peace. Sadly, this beastly madness is exactly the path chosen by the city God mourns for today; it is the path which leads to destruction by the Romans in A.D.70; it is the path every human people, every rebellious human heart walks toward until we surrender our weapons in this life or the next.

And so, the peace which passeth all understanding is a peace which begins and ends with perfect justice administered by the God who is the great avenger of all those wronged by the powerful. When Jesus rips through the temple, whipping its officials and overturning the tables of the money changers, He is avenging all those wronged by the false teaching and disbelief of the priestly class; He is avenging all those robbed by dishonest business practices; He is declaring His authority as the ultimate judge of the temple, and so the ultimate judge of Israel, and so the ultimate judge of the earth.  He has come to bring peace, but that peace is only possible through the cleansing of those evil men who claim to act in His Father’s name. The temple was meant to be the holy space in which Israel could dwell with God in their midst; it was meant to be the space in which heaven and earth came together so that Israel could save the world through their faith and obedience to the covenant God gave to their fathers in the plains of Moab. Jesus is showing us today that it still is all those things, even when the Romans tear the building down to the ground, because Christ Himself is the fulfillment of every promise the temple held out to humanity. He is the holy space in which God and man are forever united; He is the one who saves the world by keeping the covenant and obediently following the will of His Father, and He is the last and great world saving sacrifice for the sins of Man. The temple destroyed by the Romans was not a failure; it was a signpost pointing to the fulfilled temple. Jesus is that fulfilled temple, and He now calls us to be the same.

For truly, if holy examples aren’t enough, if terrible warnings aren’t enough, then the only hope mankind has is the unmerited grace and forgiveness Christ reveals on the cross with those shocking words, “Father forgive them for they know not what they do” (St. Luke 23:34). We must drink deeply of this totally foreign to us divine grace and forgiveness described by St. Paul when he wrote, “For while we were still weak, at the right time Christ died for the ungodly…we have now been justified by his blood, much more shall we be saved by him from the wrath of God. For if while we were enemies we were reconciled to God by the death of his Son, much more, now that we are reconciled, shall we be saved by his life. More than that, we also rejoice in God through our Lord Jesus Christ, through whom we have now received reconciliation” (Romans 5:6, 9-11). Through the death of Christ, we can now rejoice in the new life which lies before us, in fact, St. Paul tells us we can “rejoice in our sufferings…because God’s love has been poured into our hearts through the Holy Spirit who has been given to us” (Romans. 5:3,5).

Do we now see what glorious works the Trinity has wrought in us through Christ? We have become the temples in which God dwells; we have become those who, through the grace of God, actually have the means by which to keep the law and shine as a beacon of freedom and hope to all those enslaved by sin. Christ’s death has paid the debt of our sin and made peace between God and His children, and Christ’s resurrection has liberated us from the fear and shackles of death, so that we need not fear anyone or anything ever again.  The Romans can tear down the true temple because it will be rebuilt on Easter morning; the children of men can break us with rods of iron because we will be resurrected when all things are made new.  And so, we can prepare every day for the new heaven and new earth, that new inbreaking kingdom where St. John saw the new Jerusalem crafted by the God of creation. It is there the apostle saw his resurrected friend and Lord no longer crying, no longer dying, but preparing to return to our fallen world to wipe away all tears from our eyes, to bring to us a new world where there shall be no more death, neither sorrow, nor crying ever again.