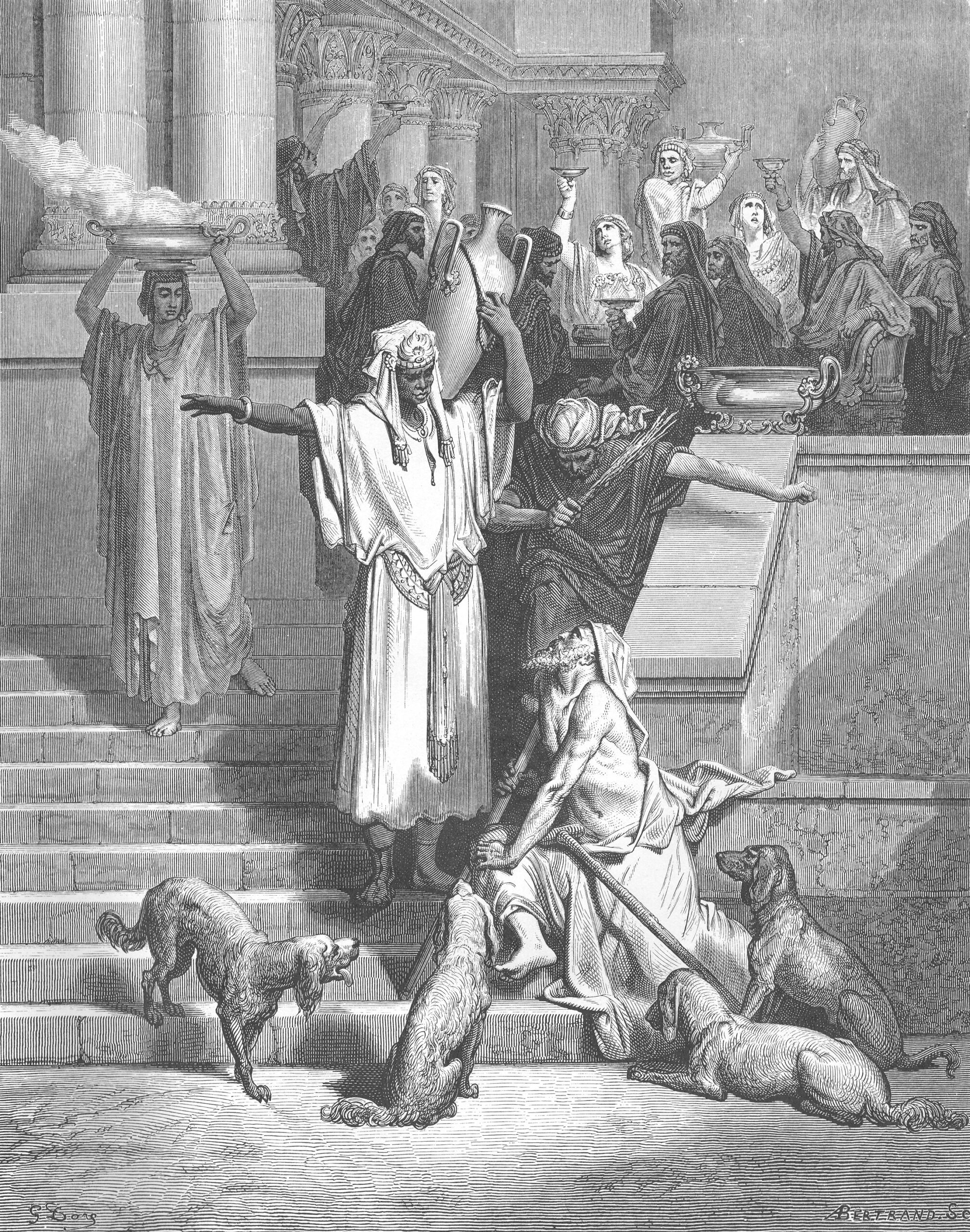 But Abraham said, Son, remember that thou in thy lifetime receivedst thy good things, and likewise Lazarus evil things: but now he is comforted, and thou art tormented (St. Luke 16:25).

In his fascinating book, Dominion, the historian Tom Holland tells the story of the first heated bath house to be constructed in Rome (about 30 years before Christ’s birth). It was built just outside the city’s walls on a hill called the Esquiline. Before becoming a place for those “clothed in purple and fine linen” to spend their leisure time, it had been a living hell where the Romans displayed slaves dying from crucifixion. Once they had drowned on dry land, these lowest of the low were thrown, naked, into a pit for birds and animals to feast upon. The state of the art bath house—itself a wonder of the ancient world—was put right on top of the forgotten corpses, and to mask the smell, wagons of flowers were brought in and constantly refreshed. When the incredible work was completed, the only reminder that tens of thousands of human beings had been gruesomely tortured and murdered there were the birds who kept coming back—trained by decades of carnage to expect more image bearers to be thrown away like garbage. The Romans who benefited from the slave labor which made their luxury possible took no gleeful pleasure in the choruses of pain which accompanied mass crucifixions, but they did firmly believe it was the necessary price for maintaining the divinely appointed order.  After all, one look at her powerful empire made it clear that Rome was loved by the gods; one look at her buildings, her armies, her noble senate and august emperors was more than enough to preach a powerful false gospel: Pax Romana, the peace of Rome was the work of the gods, the fruit of the natural law perfectly applied and all must love and fear her.

If you had told the comfortable Romans relaxing in the warm waters that one day one of their emperors would worship a dead peasant, murdered like one of the slaves upon which their beautiful bath house was built, they would have found the idea not only revolting but morally wrong. The gods had showered their favor on the rich and the powerful, and it would be perverse and ungrateful not to enjoy their bounty to the fullest. Even more horrible and perverse would be the very idea that the mighty creator God should become weak and reveal true love through sacrifice.  Love in the Roman world was like the madness which overcame a man in battle or in a vigorous hunt, and the prize was a woman or man dominated. But, as St. John tells us today, the true God has elevated love above this beastly understanding, “Herein is love, not that we loved God, but that he loved us, and sent his Son to be the propitiation for our sins. Beloved, if God so loved us, we ought also to love one another” (1 St. John 4:10). True love has been forever revealed not through the taking of another person to give us pleasure or comfort, whether we do this taking through chattel slavery or modern, competitive romantic relationships, for real love, divine love is always the radical, world-denying giving of ourselves.  As the groom states in the 500 year old words of our wedding service, “With this ring I thee wed, with my body I thee worship, and with all my worldly goods I thee endow…” In the real world, it doesn’t actually matter if a man seems like a good guy or is really funny or can lift a car over his head; no, the only real measure of a man is how much he can love as God loves: how much he can sacrifice of himself for those he loves.

This true gospel took a sledgehammer to everything the Romans believed; it meant that the blessed people on the Esquiline hill were not those enjoying a bath; no, the blessed were the poor, crucified peasants whose grim deaths revealed they were enemies to a fallen world obsessed with loving itself and dehumanizing others for that end. It meant that God so identified Himself with the cries of the crucified and the cries of all the poor and mistreated in the world that He came as one of them to reveal the true powerlessness of the powerful, the rank impotence of the mighty. As we read in the Psalms, “O praise the Lord, ye that fear him: magnify him, all ye of the seed of Jacob; and fear him, all ye seed of Israel. For he hath not despised nor abhorred the low estate of the poor; he hath not hid his face from him; but when he called unto him he heard him…The poor shall eat, and be satisfied; they that seek after the Lord shall praise him: your heart shall live for ever.” From what psalm is that excerpt? It’s Psalm 22, the psalm our Lord invoked on the Cross, the psalm He made the mission statement of His passion and death. God hears the pleas of the poor crying out to heaven, and Christ comes to save them, not by giving them corruptible treasures, trinkets, or toys; no, He gives Himself. God the Son gives Himself to the wrath even they deserve so that every poor man or woman who invokes the name of Christ may be richer than any king or president, hedge fund manager or tech billionaire.

As St. Paul writes to the Ephesians, “To me, though I am the very least of all the saints, this grace was given, to preach to the Gentiles the unsearchable riches of Christ, and to bring to light for everyone what is the plan of the mystery hidden for ages in God who created all things, so that through the church the manifold wisdom of God might now be made known to the rulers and authorities in the heavenly places. This was according to the eternal purpose that he has realized in Christ Jesus our Lord, in whom we have boldness and access with confidence through our faith in him. So I ask you not to lose heart over what I am suffering for you, which is your glory” (Ephesians 3:8-13). St. Paul is already being crushed by the same evil system which used dead image bearers as a foundation for a 1st century water park, but he tells the Ephesians his suffering is their glory. Christ’s victory over death has not just elevated our Lord to His heavenly throne, no, it has proved the stark raving madness of materialism in a world where death isn’t the end, and it has inspired St. Paul to greater and greater acts of loving sacrifice for the sake of others; it has inspired him to reach out to his natural enemies (the Gentiles), and not just to reach out to them, but to let the fallen world crush him so that he might bring them the truth and love of God: those unsearchable riches which it is our impossible pleasure to partake and share.

And so, when we hear in today’s parable that Lazarus is welcomed into Abraham’s bosom to feast in the presence of the forever blessed, there might be some part of us which says, “Why is this poor guy so richly rewarded? What did he ever do?” Or, maybe we see the rich man ravaged in hell and think, “Well, that seems a little harsh.”  But, once we are told that the rich man has placed himself against the will of the living God, proclaimed in passage after passage of “Moses and the Prophets,” we begin to see that his punishment is perfectly just, and our surprise or perplexity at Lazarus’ salvation and the rich man’s damnation has more to say about our worldly perspective of human value than about what God thinks of us and the monuments to ourselves we have built.

It was no accident when the early church, as some of her first acts, began to take care of widows and orphans and the poor destitute. She was simply doing the work her Savior demanded, a work given to God’s people: a sacred charge whereby we love those whose suffering makes them the special recipients of God’s grace—those especially wounded in the war between good and evil. The sacrifices those first Christians made were a flaming arrow into the heart of Roman society; a society which responded to their love, at first, with hatred and distrust before being changed and shaped and remade by it. When the Roman emperor Constantine, knelt before a cross for the first time, a mere 300 years after Jesus spoke these words we hear today, it was the marker of a new way of seeing humanity. If God chose to come to earth as a common man, what does that say about the value of a common man’s life? It means he has infinite value, and so we must treat him as such. It means we can never look at another human being again as either a tool for our pleasure or an obstacle to our happiness. It means we must walk away from our tables of plenty, open the gates, and beg Lazarus to sit at our side. For when we break bread with those grimly assaulted by our fallen world, we strike a blow against the dark evil which strips men of their God given humanity, and we prepare ourselves for the heavenly embrace of our Lord and King, who came to us as a commoner, died the death of a slave, and now wears the bright clothes of resurrection—which neither time nor death can ever strip away.