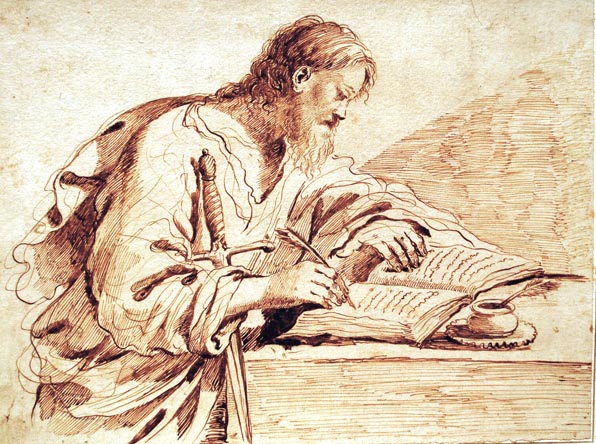 Be ye therefore merciful, as your Father also is merciful (St. Luke 6:36).

It has been said that the heart of our Lord’s Sermon on the Plain is His stunning declaration, “But I say to you who hear, Love your enemies, do good to those who hate you, bless those who curse you, pray for those who abuse you” (St. Luke 6:27-28). How strange this divine command must sound in the scared and angry world in which we find ourselves; although, we shouldn’t think we are too very special as it is hard to exaggerate how strange and downright evil this command would have seemed to men and women steeped in the normal, everyday violence humanity has so long embraced. The Roman Empire was notorious for gruesomely dealing with her enemies, not because of any unthinking brutishness; rather, the cruelty was emblematic of a sincerely held moral duty to subjugate the weak and live as the strong. But even in the long-lost age of man’s infancy, we hear the terrible, boastful cry of the antediluvian war lord, Lamech, “I have killed a man for wounding me, a young man for striking me” (Genesis 4:23).

It is Lamech then who captures humanity in its fallen, wounded state: left to our own devices we become a living reflection of the violence which surrounds us in the fallen, wounded world. By the logic of fallen man, all I have is this one life, and if I have the power and opportunity, I must destroy anyone who threatens my life or could threaten it.  That said, it should be no surprise to us that just about every part of our wounded hearts and souls and bodies reacts violently to the idea that we should actively love people who hate us: to give them our face to strike again, to give them our shirt if they steal our jacket, to be as merciful to them as our Father is to us.

Which raises a silly but understandable question in our minds, “How merciful is God to me?” As is usually the case, St. Paul has some answers for us, “For while we were still weak, at the right time Christ died for the ungodly. For one will scarcely die for a righteous person—though perhaps for a good person one would dare even to die— but God shows his love for us in that while we were still sinners, Christ died for us…For if while we were enemies we were reconciled to God by the death of his Son, much more, now that we are reconciled, shall we be saved by his life” (Romans 5:6-8,9).  It is this undeserved mercy from the Father through the Son to us miserable sinners which either changes us into new creatures, who no longer must use violence against our neighbors and enemies to attain heaven on earth, or I suppose it doesn’t, and we have our answer as to our status before the Lord.

Understanding the mercy God lavishes upon us is impossible to even approach except through the sacrifice and pain Jesus willingly accepts, as a human man, to show us how to overcome evil.  It is not weakness Jesus reveals when He sheathes the sword of His unimaginable power to die for the sake of His enemies, and it is not weakness when a Christian takes up his own cross and follows Him.

What the Father is telling and showing us, through Christ, is that it is the violent who are weak and the peacemakers who are strong.  What do we think Jesus means when he says, “Blessed are the peacemakers: for they shall be called the children of God”? Not to be a child of God is to be a child of wrath, not to be a peacemaker is to be still at war with the God who rightfully guards His authority to forgive and to punish, to bless and to condemn. As we read in the Psalms, “O LORD God, to whom vengeance belongeth, thou God, to whom vengeance belongeth, show thyself. Arise, thou Judge of the world, and reward the proud after their deserving” (Psalm 94:1-2). We can either be the people singing this psalm, or we can be the people against whom it was written; we can be proud or we can be holy. The two paths which lay before us then are not weakness or strength, but whether or not I will pretend I am some kind of god, meting out justice and mercy as I see fit, or whether I will follow the true God to Golgotha and die with Him there.

Thinking about today’s readings this week, I was reminded of an incident which unfolded before me when I was a young man in Africa. My warship had just dropped off food to a village in an attempt to win hearts and minds in the fight against Al-Qaeda. The local government was in charge of handing out the food, but being riddled with corruption, we knew the food would be hoarded by the wealthy and powerful while the poor continued to suffer. My small detail’s job was to at least make the local government stooge feel a little bad about his graft by standing there next to him, and of course, I had to write a report on it later. It was then that a man, a little older than I am now, came up to try and secure food for his family.  At first, I couldn’t understand what he was saying as my French is pretty terrible, but he eventually appealed to us in broken English, “food, Jesus, food.” The soldiers guarding the food began to beat him with their Kalashnikov rifles (they didn’t have any bullets in them, so they were most useful as clubs). We were unarmed, but even if we had been armed, we were under strict orders not to intervene, and so we didn’t. But, every time they beat this poor soul, a Christian as could be surmised from the little prayers he said in between vicious onslaughts, he got up and walked back over to the food only to be hit again and again and again. Finally, after getting up from what I thought for sure was a killing blow, he walked over to the soldiers, and they gave him two bags of food. The soldiers were so moved by his bloody persistence, by his courage in the face of death, that they gave him the food they gave to no one else.

The reason for me telling this story from my other life is not just to say, “Go and do thou likewise;” although, this man whose name I don’t even know cast the brightest reflection I have ever seen of Christ’s incredible valor on the day he died for all of us. No, I tell this story to ask three questions which still haunt me: What if he hadn’t received the food? What if those hot and tired soldiers had simply killed this man who refused to fight them? Would the story have a happy ending or no? These are the questions which should not just haunt me but should haunt a people obsessed with the temporary victories of now. What does St. Paul say, “For I reckon that the sufferings of this present time are not worthy to be compared with the glory which shall be revealed in us” (Romans 8:18). Do we believe him? Does he mean all the sufferings, even the ones I least want to face? Yes, all of the sufferings we have been set apart to experience are worth the divine glory which is revealed in the children of God: both, as we now stand firm against the tides of darkness which beckons us to hate our enemies and become just like them, and also when we fully become the men and women destined to rule and heal a creation groaning and travailing in the pains of childbirth.

We as the firstfruits of this new birth are privileged to offer ourselves through public, sacrificial love for others, so that men will have no doubt of where our faith lies, so that men will see that the only way to truly live in a world that is dying is to live for the world to come. When we bring Christ into the conflicts of our lives through this humble, loving obedience to the Word’s example, we are showcasing the only true freedom there is: the freedom from any attachments to this world which alienate us from the glories of the new world to come. This is a freedom not just worth dying for; it is a freedom worth suffering for; it is the freedom by which true love is made real.

And, if we have the true love of God, then there is nothing which can separate us from Christ, neither “tribulation, or distress, or persecution, or famine, or nakedness, or danger, or sword…Nay, in all these things we are more than conquerors through him that loved us. For I am persuaded, that neither death, nor life, nor angels, nor principalities, nor powers, nor things present, nor things to come, Nor height, nor depth, nor any other creature, shall be able to separate us from the love of God, which is in Christ Jesus our Lord” (Rom. 8:37-39). If we are loved by God then no evil can stand against us; if no evil can stand against us, then we can be free, we can love, and we can be as merciful as our Father is merciful.

May God grant us the courage for this new life today and every day, until courage melts into contentment, sacrifice into eternal joy.