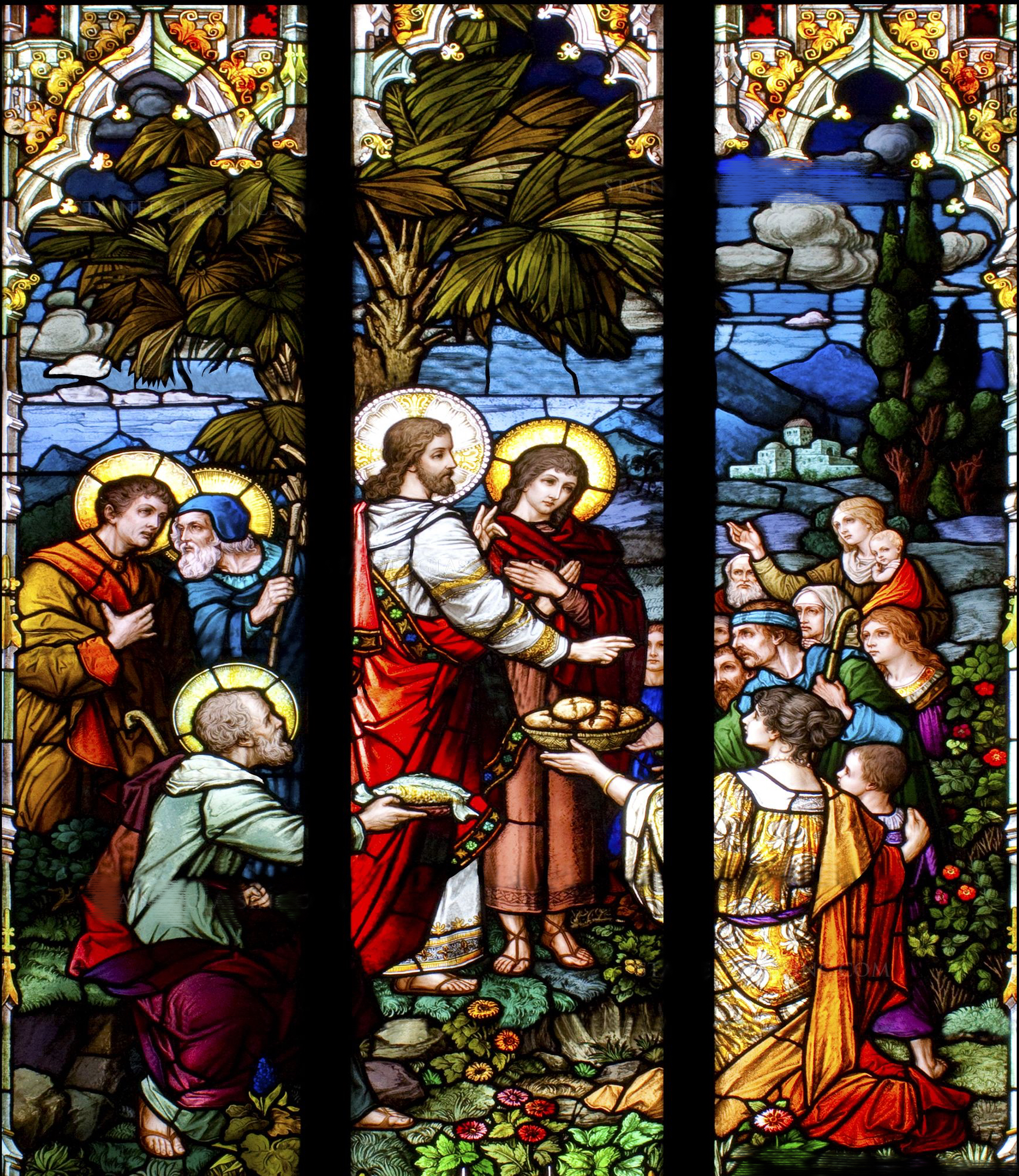 The Seventh Sunday after Trinity 2022

For the wages of sin is death; but the gift of God is eternal life through Jesus Christ our Lord (Romans 6:23).

St. Paul begins today’s epistle with something of an apology. It is in fact a pretty rare thing to hear from the mouth of God’s boldest champion: a man chosen to bring the truth of God’s righteous love and justice to the world. But here, in the latter part of chapter six, the Apostle Paul wants to make sure his audience fully understands their new status as men and women ‘dead to sin and alive to God in Christ Jesus.’ That glorious announcement of our true freedom in Christ brings with it all the risks and uncertainties which any freedom brings, and so the apostle reaches for a way to describe the total dependence, total belonging, and total allegiance which is the only logical and loving response to the new life breathed into the hearts and souls and bodies of God’s everlasting children of grace. The imperfect analogy he brings forward is this, ‘…thanks be to God, that you who were once slaves of sin have become obedient from the heart to that form of doctrine which was delivered to you, and, having been set free from sin, have become slaves of righteousness’ (Romans 6:17-18).

This picture of the human person tends to make us very uncomfortable because it is both unflattering and uncomplicated. It is terribly unflattering to be described as a degraded slave of the sin and evil which ravage our world and our souls. Human hearts are deeply offended by this rather obvious observation, shooting back, ‘How dare Paul point at my addiction to sex or power or money and call it slavery, I can quit anytime I want.’  But, what’s even worse than having a highlight reel of our greatest failures played before our eyes and hearts—leaving no doubt in our minds whom and what we are serving when we sin—Paul reminds us that there are only two sides in this war. He reminds us that we are not super complex enigmas struggling impossibly to know what’s right and wrong for our own unique experience; we aren’t a people submerged in a dark, grey world where black can be white one day and white be black the next; no, we know what it means to present our [arms and legs, eyes and hearts] as slaves to impurity and to lawlessness… We can close our eyes and pretend it isn’t so. We can even imagine sin isn’t that bad, but God won’t let us get away with ignorantly serving an abusive master to whom we no longer must grovel and defend.

And so, let’s put some flesh on the bones of St. Paul’s outline. What does the personified evil he describes today look like? The Wall Street Journal had a heartbreaking profile of the Kenyan national bomb squad, most of them Anglican, who are tasked with carefully disarming the bombs Boko Haram straps on innocent children before dropping them off in the middle of their home villages. Sometimes, the terrorists wait in a nearby building for the bomb disposal men to approach before detonating the device; sometimes the abused children have been so thoroughly brainwashed by a religion of destruction and death that they blow the bombs up themselves—taking with them the brave souls just trying to save them. There is a perfect genius to the evil which drives men to grab children from playgrounds and turn them into slaves of terror and death. What St. Paul is telling us today is that the evil I just described, an evil which makes us shudder in our very souls, is simply a different manifestation of the same evil which reigns in the hearts of the damned: the evil which calls out to God’s people begging us to throw away our new lives for the life which only ends in terror and death.

Before we move on in St. Paul’s argument, let’s define a term he uses a lot in chapter 6: ‘death.’ First, we are all going to die—some of us sooner than others. It doesn’t matter how many pushups we can do or how much red meat we eat or avoid; it doesn’t matter how much money we’ve made or how many hours we’ve worked; we are all going to die, and when we do, we are all going to face the Judge who cares infinitely more about our union with Christ than about any of the temporary things we worry about. It is this meeting between Creator and creature which concerns St. Paul in today’s text. The death he is describing is God’s final judgment of eternal condemnation: a second death, a final death. Mere creatures can kill you in this life, but it is only the perfect judge of good and evil who will look at the stories of our lives and either see the imprint of Christ and eternal life or the imprint of sin and eternal death. Our biggest threat is not that we will be tempted to join Boko Haram or even be murdered by them; no, the greatest threat to our future lives in the new heaven and new earth is failing to recognize how the evil which motivates Boko Haram to sin is the same evil which motivates us to sin.

Remember, Boko Haram think they’re the good guys too, and so they believe this special status entitles them to make their own rules—including waging unrestricted war against children in order to realize some truest possible human life—they are slaves to a kind of perverse freedom, a freedom St. Paul describes today as a freedom from righteousness: a freedom whose purpose is always death. It is this same freedom from righteousness which most Americans mean when they use the word, ‘freedom.’ Here, we can better observe the true genius of our great enemy. We can see how Satan has manipulated humanity into not recognizing the horrible connections between an African death-cult which takes Kenyan children and weaponizes them against Christianity, and a Western culture which takes American children and weaponizes them to be materialistic, all-consuming nihilists who hate Christianity. Take a moment to sit and recognize the true power of the enemy we face, the enemy who is desperately trying to take God’s image bearers and re-make them in his own. The master who can convince Americans it is perfectly moral to have sexual slavery in our country because pornography makes a lot of money, or that it’s perfectly moral to have slaves working in sweatshops to make our clothes and phones, or that it’s perfectly fine, virtuous in fact, to murder unborn children if they get in the way of our freedom from righteousness.

It is only when we truly begin to recognize this vast empire of evil conquered and ruled by the prince of this world that we will start to see why St. Paul would use an analogy like slavery to describe our dutiful lives under the Lordship of Christ. He uses that term because we fallen humans don’t know any other way to live. Everyone we know serves someone, from the most anti-patriarchal 4th wave feminist to the alienated gamer to the skater punk to the Antifa stormtrooper to the citronella carrying klansman all the way down to the man who clings to his pillow for another half an hour rather than come hear and taste the Word of God. Evil’s greatest weapon is its ability to adapt to our lives and make evil seem normal. The secretaries at Auschwitz were just filing papers, does that make them innocent? We would of course say, ‘No,’ but how then can we claim innocence if we serve the same dark master in our own culturally accepted ways? We are not all so blessed as to have the 101st Airborne show up and force us to see the evil we serve; St. Paul is doing that for us today. And so, our every action answers the question: ‘Whom do we serve?’ Do we serve the master who can only provide the rotting fruit of a dying world, or do we serve the master who gives us not what we deserve but what we don’t even know how to ask for?

There lies our true position, and that is where our loving God meets us.  As St. Paul writes, ‘For the wages of sin is death; but the free gift of God is eternal life through Jesus Christ our Lord.’ (Romans 6:23). Evil promises to pay us the fair wages our good and bad works deserve. Evil promises to meet us at the end of our lives—as we are stripped of all our possessions and loves and hobbies and accomplishments—evil will be there with a smile and check made out to death. If evil is the master we choose, we will be treated fairly—we will be left with nothing but the cruel master we served but could never save: we will be left with nothing but ourselves. If then we are, by our maimed and bloodied natures, constrained to serve some master this side of the grave, let it be the master who has revealed His righteousness not as some abstract theory, not through a list of rules, not even as a reward for a job well done. Let us serve the master who broke Himself against the same humanity that is breaking us; let us serve the master who looked at the warring, selfish, spiteful tribes of men and said, ‘I will save them, I will redeem them, I will show them how to love.’ We begin by never again saying, ‘I know best,’ we continue by recognizing that the only lasting part of our lives, the only thing which will matter when the last tears are shed over our graves, is the free gift of eternal life won for us by the God who looks down from the cross and says, ‘Follow me.’ It is only in the following of the master who has bought us back from death that we begin to taste and sense the great freedom of His bloody exaltation. The Christian, made new in the baptism of Christ’s blood, must say, ‘I am yours: lead me where you will. Lead me into sadness and suffering; lead me into pain and grief; lead me into sacrifice and praise; lead me to the resurrection; lead me to the new earth; lead me to freedom; lead me to forever.