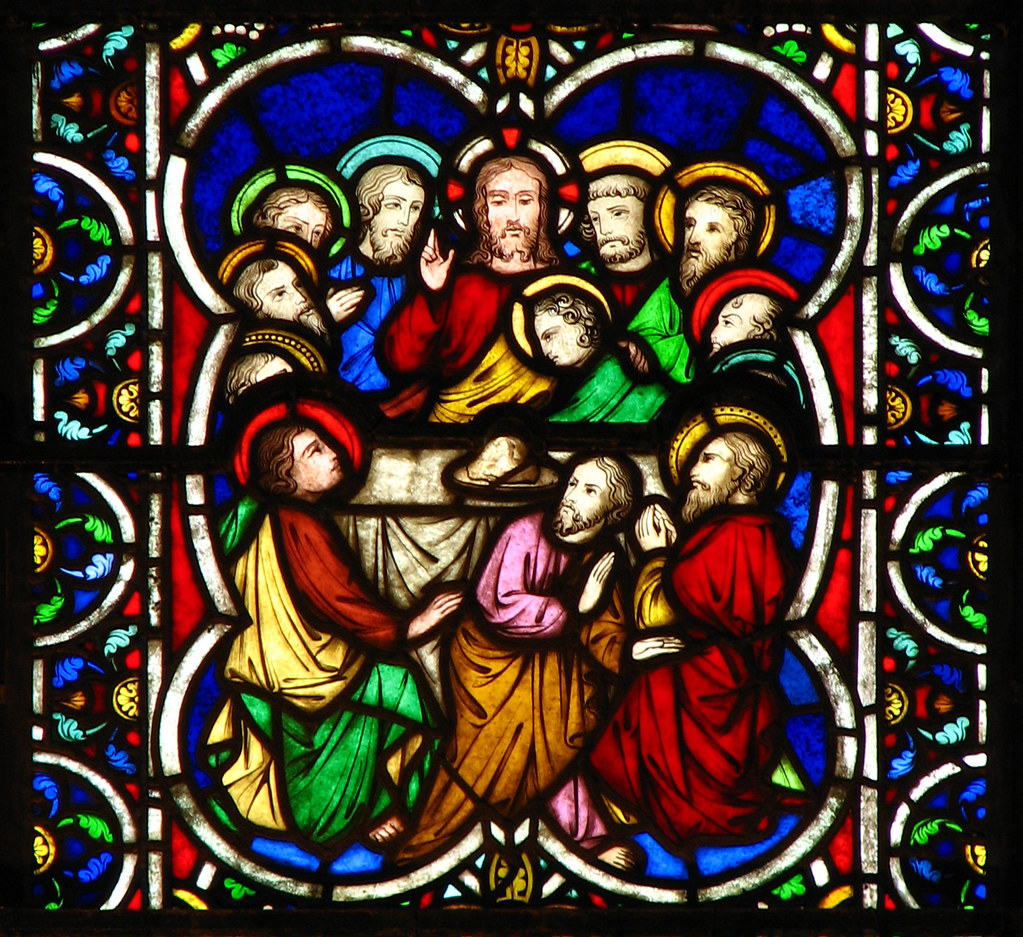 The Second Sunday after Trinity 2022

For I say unto you, That none of those men which were bidden shall taste of my supper (St. Luke 14:24).

Directly before today’s parable, an excitable man—eating and lounging near our Lord—piously declares, ‘Blessed is he that shall eat bread in the kingdom of God’ (St. Luke 14:15). This powerful man had been invited by one of the chief Pharisees for a bit of dinner theater starring the young prophet who was causing such a stir throughout the land. Part of the night’s entertainment was to sit a dying man right next to Jesus to see what He would do: to see whether our Lord would let the man suffer and die (so as to uphold the expectations of His rich and powerful hosts) or if He would heal him as He had done for so many of the lost and the damned whom He had embraced as family. For the assembled luminaries, the sufferings of the dying man were simply a reflection of God’s judgment upon him; a living reminder of his lack of holiness and blessing as compared to their hard earned self-righteousness. This dying man had been invited to the Sabbath dinner not out of charity but as a trap for Jesus, a figure of amusement for the assembled guests, and a foil to reveal their own worthiness as masters of the people.

St. John in today’s epistle tells us not to be surprised if the world hates the followers of Christ, hates those whose very lives are a reflection of the love which becomes possible when we fill our lives with resurrection joy rather than temporary distractions from death. These men assembled around Jesus believe they are God’s people even as they hate Christ and His suffering creature, hate them in a way only those who are dying without hope can hate; a hate which drags everyone around them into the blackness for which their broken hearts long. A peculiar part of Christ’s mission, one of the great revelations of God’s incalculable love, was His willingness to sit in rooms like this one while evil men schemed against Him, mocked Him, and hated Him. Of course, Christ shows the Trinity’s compassion and love by healing the suffering man, but He also reveals perfect, divine love by proclaiming the truth. The truth will lead evil men to hate Him even more, even to the point of having Him murdered by the empire the Pharisee’s entire system of religiosity was designed to topple. This irony was not lost on John who includes in his Gospel this exclamation from the High Priest to Pontius Pilate, ‘We have no king but Caesar’ (St. John 19:15), a declaration made with no interruption from the Pharisees. Rebellion against the Living God has always made for strange alliances and bitter tragedy. We see that even these last few days with the strange coalition of men and women screaming on the internet and in the streets because it is now harder to sacrifice unborn children on the altars of disordered sexual gratification.

But on this day, Christ speaks through a parable which links feasts, like the one He is attending, with God’s eternal reign. The prophet Isaiah gives us a vivid picture of the great eternal feast, what St. John in Revelation calls ‘the marriage supper of the Lamb,’ when he writes, ‘On this mountain the Lord of hosts will make for all peoples a feast of rich food, a feast of well-aged wine, of rich food full of marrow, of aged wine well refined. And he will swallow up on this mountain the covering that is cast over all peoples, the veil that is spread over all nations. He will swallow up death forever; and the Lord God will wipe away tears from all faces, and the reproach of his people he will take away from all the earth, for the Lord has spoken. It will be said on that day, “Behold, this is our God; we have waited for him, that he might save us. This is the Lord; we have waited for him; let us be glad and rejoice in his salvation”’ (Isaiah 25:6-10). The great sign of the world’s redemption and renewal, of the end of death and ignorance and hate, is a meal. Why is this important? Why portray the victory over evil as being celebrated in an enormous feast?

For one, it gives us a vivid picture of what eternity will look like. Far from being disembodied spirits floating around in the ether, the resurrected people of God will eat and drink as our risen Lord did; we will have real, redeemed bodies through which we will be the humanity we were created to be. But even more than this wonderful, glorious future Christ’s resurrection makes a certainty, this connection between feasting and the kingdom of God helps us understand some of the basic parts of God’s religion. In Deuteronomy, Moses commands the chosen people to use part of their tithe, the 10 percent of their earnings they were required to give to God, for the express purpose of a great feast in the Lord’s presence, the people were commanded to ‘…eat there before the Lord your God and rejoice, you and your household’ (Deut. 14:27). The great beginning of the new world feast was commemorated year after year with this meal enjoyed by the worshipping family, along with the priest, the Levite, and the poor who were graciously invited to taste together a physical enactment of future glory.

But, we might rightly ask, how does a religious barbecue save anyone? For while a good brisket can certainly provide evidence for the existence of a benevolent God, how could it possibly reveal to me or anyone else that we belong at the feast of feasts: the feast to celebrate the end of death? It can’t, of course, but as with the entire sacrificial system of the Old Covenant, it can establish the correct categories in our minds for understanding what actually can save us; it can prepare us for the Great High Priest and the Great Sacrifice around which all of history pivots. Just as sinful humanity brought sheep and bullocks to be slaughtered for our sins, so too did we drag our mutilated Creator to the Cross to die for our rebellion. If we are born of woman, we have terrible, personal solidarity with the mob who screamed out, ‘Crucify Him, Crucify Him.’ If we have sinned even once, we can personally claim a place with the men who in their rage and madness murdered God—the God who wouldn’t let us die in our sin, the God who to feed us forever gave Himself to be the one sacrifice, the one oblation, the one meal.

As St. Paul says of Christianity’s great feast, ‘For as often as ye eat this bread, and drink this cup, ye do shew the Lord’s death till he come’ (1 Cor. 11:26). It is then the Holy Communion of the Lord’s Body and Blood which simultaneously fulfills the promise of the Old Testament ritual while also bending time and space so that we both participate in the sacrifice which makes the end-of-death feast possible while also being assured of our place in that great feast to come. By the power of the Holy Spirit and through faith in Christ’s blood, the church is given the remission of her sins and all the benefits of Christ’s passion. Our Lord hangs on the tree and we are given an everlasting feast; He gives everything and so we are given everything.

None of this world-saving generosity, this new world building grace, happens because of our self-righteousness or who our parents are; we don’t get a seat at the great table because of our party affiliation or our money or our perfectly calibrated political opinions. It is those who know they need the feast who answer the master’s call: the men and women who run to the master’s table are the outcasts from a fallen world which rewards evil and idolatry—a broken world which rewards attitudes like, ‘I have to make more money than I will ever need, so I can’t come to the feast,’ or ‘I just bought a new car, and I need to try it out, so I can’t come to the feast,’ or ‘I really need to focus on quality time with my family, so I can’t come to the feast.’ There is no shame in being a pilgrim and a stranger and an outcast in a world which hates charity and peace, and it is precisely those pilgrims—to the shock and horror of Jesus’ original audience—who will be processed into the seats of honor to feast and worship and love for all time.

And so, our Creator forces all of humanity to look at itself and determine whether we are more like the men who surrounded Jesus as he told today’s parable, or are we more like the humbled, new men and women of the future healed by Christ Himself? Are we more like the those who are ‘choked with cares and riches and pleasures of this life,’ or are we the pilgrims and strangers who restlessly long for the return of our King and the setting right of all things: those who eat and drink at the Lord’s Supper in aching anticipation for the end-of-death feast to come?

Let us pray then that we may we never turn down the invitation from our Lord to join in the feast which has no end, may we daily seek opportunities to serve God and Man knowing all sacrificial love leads to that feast, and may we live as those who have been given a seat at the table, a rail to kneel before, and the gift of Christ’s everything which no devil or man may take from us.