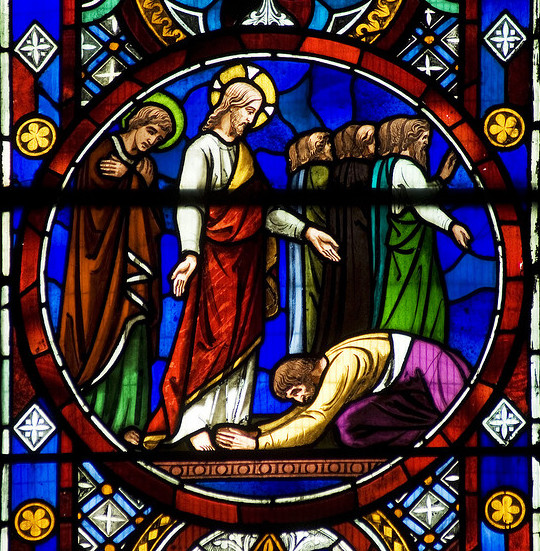 The Fourteenth Sunday after Trinity 2022

And those who belong to Christ Jesus have crucified the flesh with its passions and desires (Galatians 5:24).

A great difficulty in understanding the second half of St. Paul’s letter to the Galatians derives from the apostle’s use of the word: ‘liberty.’ In fact, this idea of Christian freedom is really the glorious refrain of the entire book—the chorus that keeps popping up again and again—reminding readers across the centuries that Christ’s sacrifice on the cross has changed what it means to be human. So, why is it necessary for Paul to keep talking about freedom? Who is he trying to convince? Don’t all people yearn to be cradled in the arms of liberty; don’t all people want to be free? Well, yes and no, for so very much depends upon what we mean when we use the words, ‘liberty’ and ‘freedom.’

Take our political understanding of ‘liberty’ as an example. When we recite the Pledge of Allegiance, we all use this word, but one American might envision liberty as the government leaving him alone or treating him the same as anyone else. Another might define, ‘liberty,’ as the government using its powers to level the playing field or assist the weak against the strong. These two people will be speaking the same word, and from the outside, it will appear as if they are united, but this public, political unity is really a useful illusion to keep order and help men survive in a hostile world (not an insignificant thing, mind you).

As Christians, a similar effect can take place, but with much more long term consequences, in fact, everlasting consequences. The Christian freedom and liberty we cherish is bigger than anything this temporary, fallen world can contain. We have been liberated from death itself by Christ taking our death upon Himself. There is now no more fear of death to force us into bad choices or unhealthy obsessions. We are free from that fear, and so we can now turn to Christ, turn to the One who has set us free, and reorganize our entire lives around how He defines freedom and liberty. Paul tells us today that this transformation is non-negotiable. We cannot celebrate Easter, we cannot celebrate human freedom from death’s dominion, without bowing before our Savior and King to learn what perfect freedom truly is. We also cannot be surprised if the Savior we need to save us from ourselves has a different concept of freedom then the one which sits comfortably in our sin scarred hearts.

What we learn most vividly from today’s portion of Galatians is that Christian freedom, in this life, is lived in the midst of terrible conflict. St. Paul describes a war in our hearts between the Holy Spirit and the ‘lusts of the flesh.’  No war in the history of the world is as important as the conflict which rages in the hearts of humanity because every other war is temporary, and you are immortal. I was reminded of this fact when I heard a news story which reported American approval in Vietnam is at 80%: only 50 years after we were killing each other. Wars will come and go, empires will come and go, but you are an immortal creature for whom God the Son descended from heaven to save, and for whom God the Holy Spirit now personally battles to defend and keep in the unforgiving jungles of this present darkness. Thermopylae isn’t mentioned in the Bible; Waterloo isn’t mentioned in the Bible; D-Day isn’t mentioned in the Bible, but the battle of Hugh and Tim and Madeline and Landon and Meghan takes center stage in today’s text. Amazingly, God has chosen to forge our holiness through this battle within ourselves; He has chosen each of our hearts to be temples where we can dwell with and worship God the Holy Spirit, and He has chosen these same hearts to be the fortresses from which He sallies forth to purge our entire beings of the evil which poisons the world. The daily battle which takes place in the heart of the regenerated, reborn, recreated Christian is a living foreshadowing of the great eradication of evil Christ will bring at His second Advent. Through the sanctifying grace of the Holy Spirit, we are being prepared to join our Savior when He returns to make the world right and true and free; we are being prepared to be the warriors who finally take back the good creation Adam and Eve so tragically failed to defend.

So, in this most important war, it is a matter of life and death to know who are our enemies and allies in this fight. First, the enemy, our King James Version translates the Greek to define it as the, ‘lusts of the flesh,’ but over time, lust has lost some of its broader meaning in English and now almost exclusively refers to sexual sin. St. Paul’s usage here is much more all encompassing, as can be seen in the list of sins which further describe the fallen human condition: ‘…sexual immorality, impurity, sensuality, idolatry, sorcery, enmity, strife, jealousy, fits of anger, rivalries, dissensions, divisions, envy, drunkenness, orgies, and things like these” (Galatians 5:19-21). Disordered sexual relationships are certainly an enormous source of pain and confusions in the 21st century, but they are not the only one. It helps if we think of ‘lust’ here as a kind of ‘over-desire’ or the desiring of something so much that it becomes a weapon in the hands of our enemy. At its heart, lust is the turned inward evil version of love wherein we use another person to bring us pleasure rather than giving ourselves fully to another in humble imitation of our Lord. This is why fornication is wrong, not because illicit sex isn’t pleasurable, but because it isn’t love. Lust is the opposite of Christian, sacrificial love in the same way that an abortionist’s operating table or a garage full of expensive cars are the opposite of the cross. An abortion or lots of cars may feel like they provide freedom, but they are only so many more scars on our backs from the enemy’s slave whip.

But, what drives people to murder their own children or buy more cars than they can ever drive or whatever dark wound we are harboring in our soul this morning.  St. Paul calls it our ‘flesh.’  Here too we must be careful to understand just what the apostle is saying. St. Paul is not saying our spiritual side is good and our physical side is icky; he isn’t carving us up into ‘spiritual good, physical bad.’ Rather, the ‘flesh’ describes the sin-desiring aspect of our whole being as opposed to the God-desiring aspect of our beings. The ‘flesh’ is the part of our sinful heart which is being purified by the Holy Spirit; it is the part of us that yearns to worship and live for the created things of this world. The Holy Spirit fights against these passions and desires, but He also enlists us to fight alongside Him and to be strengthened for combat through the Word and Sacraments of His church. Again and again, the Holy Spirit unites us to the saving work of Christ which is our only hope for true freedom within our wounded souls and decaying bodies.

Gloriously, what springs from being supernaturally joined with Christ is that we are united with His death and resurrection, and so we can begin, even now, to bear the real fruit of the world to come. In every Spirit led action, we can feel the distant rumblings of a new world and a new humanity moving through our hands and feet, tongues and hearts. This fruit is not so much something we do, but the real outflowing of the divine love and grace to which we are eternally united. St. Paul describes some of this fruit: ‘…love, joy, peace, patience, kindness, goodness, faithfulness, gentleness, self-control’ (Galatians 5:22-23). A man or woman who bears this fruit, planted and cultivated by the Spirit, is already experiencing a daily and hourly foretaste of what it will be like to live and love as the new humanity in the new earth to come. Blessedly, this list of fruits is not a series of commands or a new law to try and fulfill; no, these are the inevitable and unstoppable consequences of being made alive and free by the Spirit.

Which bids the very practical question: ‘Why might I not be bearing fruit?’ Here is one reason Jesus gives in the Parable of the Sower: ‘As for what was sown among thorns, this is the one who hears the word, but the cares of the world and the deceitfulness of riches choke the word, and it proves unfruitful’ (St. Matthew 13:22).  What is the part of us that responds to ‘the cares of the world and the deceitfulness of riches?’ What is the part of us that desires to ‘choke the word?’ Why it’s the flesh of course—the ‘old man’ as St. Paul also refers to it. This same apostle tells us that we must ‘crucify the flesh with its passions and desires’ (Galatians 5:24). He is telling us that we must pitilessly destroy that thing we falsely believe will save us or make us happy; we have to brutally execute this thing we think we need and love, or it will kill us. As the Anglican priest and theologian John Stott puts it, ‘We must not only take up our cross and walk with it, but actually see that the execution takes place.’ We have to nail our old man to the cross as he screams at us and begs us for life. Can we do that? Can we stomach seeing the thing we falsely love more than God die on a cross? We must if we want to be truly free; we must if we want to live in the blessed Christian liberty which makes us no man or demon or desire’s slave. May the Spirit be with us as we walk with our cross, and may He give strength to our hands as we crucify the flesh and begin to live in the perfect freedom of the new world to come.