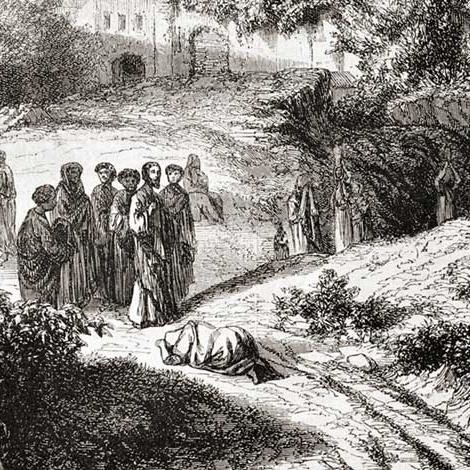 And, behold, a woman of Canaan came out of the same coasts, and cried unto him, saying, Have mercy on me, O Lord, thou Son of David (St. Matthew 15:22).

Today’s Gospel text from St. Matthew has the distinction in my own memory of being used as the launching pad for the worst sermon I have ever heard. It was given by a priest whose faith had been warped and corroded by wounded men and women, teachers of a sort, who had taught him to hate the true God revealed in Holy Scripture and to replace Him with a small, irrelevant god who constantly seeks our approval, or more accurately, constantly seeks the approval of the right kind of people: the elite, the powerful, those on the “right side of history.” This preacher took today’s beautiful story of God’s stunning expansion of His kingdom, and instead of forever dwelling in the infinite sea of God’s mercy, he told us Jesus was a racist and a sexist who needed this heroine to set him straight. The moral of his story (always beware sermons with a moral) was that, since even Jesus could be racist and sexist, we should recognize our own racism and privilege, and if possible, be like the Canaanite woman who spoke truth to power and refused to be muzzled by the patriarchy of Christ and his disciples. Of course, this work of anachronistic imagination is what comes of knowing the fallen world’s explanation for human misery better than the cure for sadness and death we find emblazoned on the pages of God’s Word.  The horror of this bent inward way of looking for help is that if we call the living cure for humanity’s misery “a racist or a sexist” it’s pretty hard to imagine how we will ever be able to call Him prophet, priest, and king.

But, of course, the God we meet today in the pagan lands of Tyre and Sidon hasn’t come to match our expectations: He has come to burn them away with His love. Jesus has led His disciples into pagan territory because the very men who should be celebrating His advent, the Pharisees and scribes, refuse to believe what their eyes and ears testify; they refuse to believe that this carpenter from Nazareth is the messiah: the anointed liberator for whom God’s people have been waiting. Again and again we see this pattern reflected in the kingdom movement of God: first to the Jews and then to the Gentiles, or more fully stated, first to the Jews and through them all the nations of the world will inevitably be blessed. That said, it’s easy to get onboard with a kind of vague idea of God blessing the nations through His chosen people, but both the disciples, and the church for that matter, will find the cost of this project to be almost more than we can bear. It is, however, a cost we must bear because Christ bore it before us and because the Holy Spirit has promised to give us the strength to bear more than we can even imagine.

There is nothing vague or abstract about the love of God for the world; it is intensely personal, and St. Matthew wants us to see this reality in Christ’s encounter with the Canaanite woman. In his account of the Gospel, the apostle never calls anyone a Canaanite except in today’s passage because he wants us to recognize the enormity of what’s going on in this encounter between God and the accursed enemies of the Israelite people. As we read in Deuteronomy, “When you come into the [Canaanite] land that the Lord your God is giving you, you shall not learn to follow the abominable practices of those nations. There shall not be found among you anyone who burns his son or his daughter as an offering, anyone who practices divination or tells fortunes or interprets omens, or a sorcerer or a charmer or a medium or a necromancer or one who inquires of the dead, for whoever does these things is an abomination to the Lord. And because of these abominations the Lord your God is driving them out before you” (Deut. 18:9-12). The Canaanites were guilty of heinous sins, including burning their own children to death, but they had mercifully been given hundreds of years to repent–generations for God’s incredible, long-suffering patience to be displayed despite no one actually deserving it. But, of course, judgment always comes, and the judgment of Canaan was a judgment of total destruction: the same kind of destruction as can be expected on the day in which God’s long-suffering mercy for this broken world will come to an end; the day in which the church militant will put down her cross to take up with Christ the sword of vengeance against all those who used the gift of life to bring sin and death to every corner of our world, to every corner of the human heart.

It is this God of judgment and fire and might who is approached by a representative of the whole sinful world when she calls out, “Have mercy on me, O Lord, thou Son of David; my daughter is grievously vexed with a devil.” (St. Matthew 15:22). Here, from the lips of an enemy, we finally hear unqualified praise and recognition of the Messiah. We see that because she is an enemy, a Gentile, a Canaanite her cries take on a meaning which no other class of person could provide. While the religious authorities dither and argue, plot and scheme, while the damned go about their daily lives, trading and being traded, this woman, blessed in the suffering of her daughter, makes herself a public spectacle because her intense love for her daughter has been enlisted by God the Holy Spirit to open her eyes to the only hope any of us have–a truth we are taught to deny and ignore our whole lives: all of our children will die unless the Lord, the Son of David has mercy upon them. This shattered, unclean woman–this “dog” as our Lord will describe her–has been given a gift denied the proud and the powerful: she knows nothing will save her daughter except the God/Man who has come to Canaan, come to this fallen earth, to slay serpents and send evil to hell forever.

But, we must remember where we are in salvation-history. Christ has not yet died to reconcile the world to His Father. The wall of enmity still stands between God and Man, Jew and Gentile, and our Lord makes it clear that the time had not yet come for the one family of God to gather forever around His holy table. He says, “I was sent only to the lost sheep of the house of Israel…It is not right to take the children’s bread and throw it to the dogs” (St. Matthew 15:24,26). We must banish from our minds any notion of a coldness or lack of sympathy from God the Son here or anywhere in Scripture. Christ’s entire mission of humiliation and pain, glory and victory is the great act of loving compassion, the great act of divine sympathy for the world devouring mess in which we have covered ourselves. Christ has come to earth to heal all the little girls beset by the demons we have invited into our lives through sin; he has come to let us nail Him to a Cross so all the death sin deserves can be carried on His shoulders for the men and women He will never fail. A racist god, a sexist god, or even a god who is as great as the greatest human being we can possibly imagine would have left us to die in the hell we have created. Our ideal man or woman certainly wouldn’t have suffered our disdain and ignorance just for the right to die in our place. But, blessedly, the god of our imaginations is not who we are talking about today, not who we are worshipping today. That little, fragile god of the damned is not strong enough to carry us from death to life, he isn’t strong enough to bandage the wounds of the broken souls who walk our streets and smile at us when we go to Wal-Mart; the people searching and searching in all the wrong places for an answer to the haunting request of the Canaanite Woman: “Lord, help me.”

How many people do we meet a day who are simply white-washed tombs of respectability? People who seem fine on the outside but are broken and desperate and full of death when the stone is rolled away from their hearts.  What do we offer these people? Do we recommend hot yoga or an interesting hobby? Do we suggest a vacation or a new toy? Do we condemn them by preaching little sermons of conformity to a world which will, in due time, be broken apart like Canaan? Or, do we bring them to the God who forgives and loves and dies even for His enemies? Do we tell them, “I too am beset by fears and anxieties about our broken world, and even though I don’t deserve any forgiveness, God has forgiven me and made me alive with His own life.” Are we prepared to publicly call ourselves dogs whose only hope is to gather up the crumbs which fall from the Master’s table?  I pray we are, for it is this utter humility which serves as our only reasonable response to the incalculable humility of our crucified Lord, and it is the sure sign, burned into our hearts, that we are much more than dogs in the Kingdom of God; it is the sign that we belong at the Lord’s table as the chosen sons and daughters of God. Our Savior saw this mark in the faith of the Canaanite woman, He saw it in the faith of the Centurion, and by the power of God the Holy Spirit, let us pray every day that when we meet the world’s victorious king, He will see the same in us.