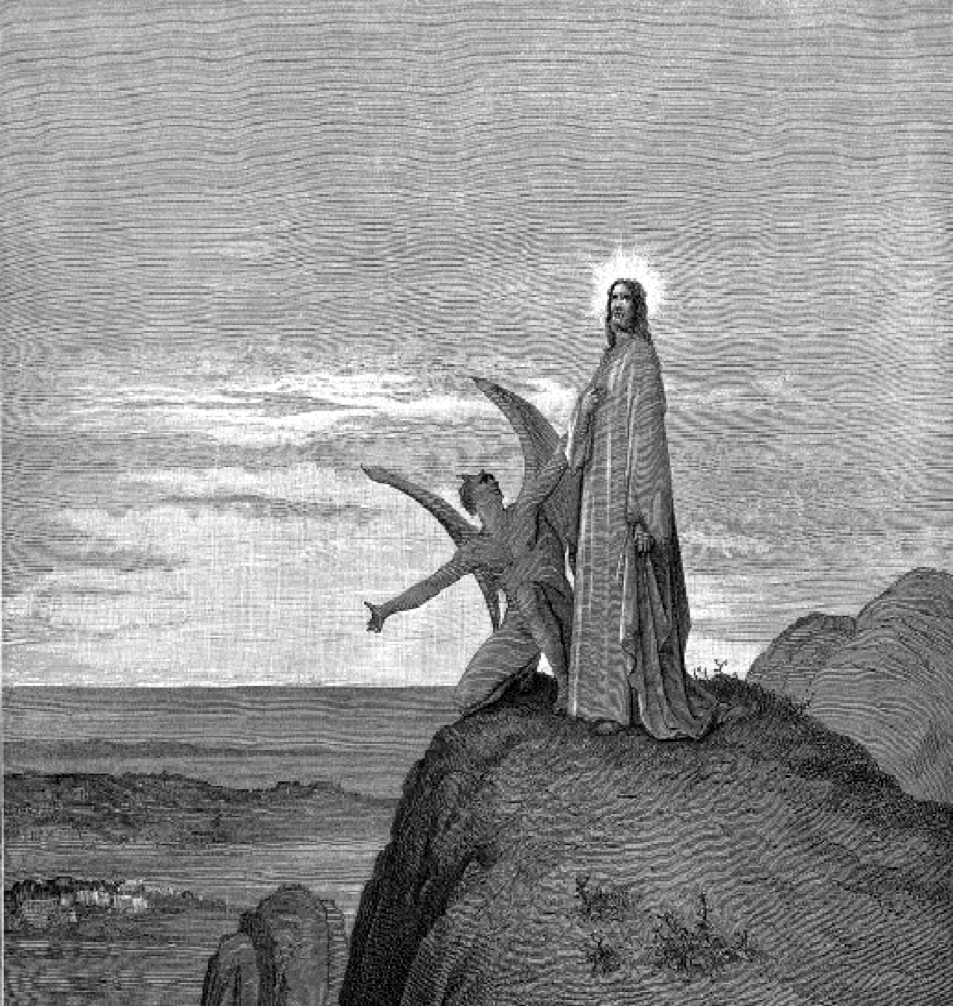 Then was Jesus led up of the Spirit into the wilderness to be tempted of the devil (St. Matthew 4:1).

Today, we join our Lord at the first skirmish of the great war for earth’s soul. Every moment of our fallen world had been heading toward this conflict between Jesus and Satan ever since God promised the fallen, broken Eve that one day her seed would crush the head of the lying serpent. Everything from the 3rd chapter of Genesis until this moment has been building up to this meeting in the wilderness of the 1st Adam’s making. The stakes really couldn’t be higher as Satan now knows exactly with whom who he is dealing. The Father, the fallen angel hates, has just proclaimed at Jesus’ baptism: “This is my beloved Son, in whom I am well pleased.” Satan has heard the language of new creation spoken at the baptism of the 2nd Adam, he has seen the new-model man rise from the Jordan, and he has now come to strangle the life out of Him with the chains of sin and death.

All advantages seem to be on the side of Satan—as they so often seem in our own world. God the Son has descended from heaven into the joy and grief and sadness of the human condition, exemplified by the chaos of the wilderness: a place whose beauty painfully reminds us of God’s perfect creation while threatening our destruction at every turn. Anyone who has every read The Call of the Wild or The Last of the Mohicans gets a sense of this beauty and danger bound inextricably together. Because of the 1st Adam’s failure to stand firm before the serpent’s temptations, the very world in which we were designed to live and thrive and rule rebels against us as we have rebelled against our Creator. On this day, the Creator Himself has come to the wilderness, not wearing the skins of His enemies, not drenched in the blood of the damned, but newly anointed in the waters of baptism and physically weakened by 40 days of fasting so that the strength of God and Man might finally be shown on this fallen planet. We see in the seeming weakness of Christ a strength which confounds us, a strength which cares nothing about itself, a strength which can only be showed by God stripped of His apparent glory, standing before His first rebellious creature.  This strength, of course, appears mad to the world, but that is because the world has no faith in anything real.  Christ does not have this deficiency; Christ has nothing in the wilderness but His faith in the promises of His Heavenly Father, and when everything is stripped away from us that is actually all any of us really have too. I ask, what of our possessions will we carry with us when we go one last time to the hospital? What satiated desire or treasured lust will comfort us when the walls we have built around ourselves come down and the wilderness finds us?

I am reminded of this reality by the Coronavirus threat which has loomed over the entire world for these many months. People have died and are going to die; maybe, people we know and love. Across the world entire cities have been shut down, millions and millions of dollars of wealth has vanished like it never existed, and we are faced with a threat which can’t be defeated by hope in the princes of men. In the face of this onslaught, God’s common grace is certainly on display in the hands of scientists and researchers, doctors and nurses, priests and deacons caring for the sick, and blessedly, it seems as if their efforts are bearing real fruit, but if this disease, or one much worse, should afflict us in such a way that the order we take for granted should fall down around us, what will be the role of the Christian in such a world? Well, we don’t have to work too hard to know the answer to that questions as Christianity has again and again responded to plagues by running to the sick and distressed and caring for them. Why? Well, because we know the wilderness has been defeated. We know that even though Satan thought he was meeting Christ in a fallen wilderness of his own creation, he was in fact meeting Christ in the very place chosen to host the Evil One’s humiliating defeat. The curses of humanity’s fall: the untamable wilderness, our alienation from God and each other, our decay and death, all of these curses find their cure in the God/Man whose glory no demon or virus can withstand.

And so, what does the God/Man show us today in His hunger and weakness and glory? We see our only hope in withstanding the snare and delusions of our great enemy, his malicious accomplices, and his useful idiots. We see that part of living as a follower of Christ will be engaging in spiritual warfare against the dark forces no gun can kill or vaccine protect us against. Testing and temptation will be part of our lives as Christians, not just from outside sources like the devil or the material things we are taught to lust after, but also from the deadness which resides in our still wounded bodies and souls.  As St. Paul writes, “For I do not understand my own actions. For I do not do what I want, but I do the very thing I hate. Now if I do what I do not want, I agree with the law, that it is good. So now it is no longer I who do it, but sin that dwells within me. For I know that nothing good dwells in me, that is, in my flesh. For I have the desire to do what is right, but not the ability to carry it out. For I do not do the good I want, but the evil I do not want is what I keep on doing. Now if I do what I do not want, it is no longer I who do it, but sin that dwells within me. So I find it to be a law that when I want to do right, evil lies close at hand.” (Romans 7:15-21).  St. Paul is telling us that due to our sinful natures, we are constantly tempted to return back to the evil of this world, tempted to reconnect with the evil we hate and know is wrong, and if that is the case, then retreating to our own interior strength or self-esteem or magical positive thinking or authentic self will only drive us to greater and greater confusion and defeat, even if the world, the flesh, and the devil tell us we have never been happier or more successful or more powerful. Even if the devil takes us upon onto a mountain and says, “All is yours.”

So then, if our interior strength, depleted daily by age and battles long fought, if this strength is not going to see us through the fights which lie ahead—how could it since we face a tireless supernatural enemy and endless waves of his human partners—then our assured hope lies not in us, but in what we are made to be by the God who loves us. Jesus, the 2nd Adam, doesn’t need to prove He is the Son of God to the Devil, anymore than we have to prove to anyone that we are children of grace and the inheritors of the new earth to come. All we as Christ’s adopted brothers and sisters must do is trust in the promises of the Father: proclaimed in sacred Scripture and sealed in the new creation waters of baptism.  Jesus doesn’t need to turn stones into bread; He doesn’t need the adoration of His fellow countrymen; He doesn’t need the whole fallen world because He has already heard: “This is my beloved Son in whom I am well pleased.” And in turn, since we heard the same at our baptisms, we don’t need fresh miracles or pyrotechnics or emotionally manipulative messages or any of the other signs and wonders demanded by our entertainment intoxicated age. We don’t need 70 years of comfort until we die in our sleep. We can rest in Christ’s defeat of Satan in the Wilderness and on the Cross; we can rest in our union with the first-fruits of the resurrection harvest, secure in the truth that no devil or demon, plague or war can do any damage to the victory already won by Christ. We can run into burning buildings, sit next to dying plague victims, even throw ourselves on a live grenade to save our friends because we serve the living God, and He will never, ever leave us in the wilderness.

Let us Christians then be the bravest people anyone meets, not because we are fearless but because we know fear no longer has any power over us. Christ has banished our fears just as He banished the Devil from his own wilderness. Let us then be brave while we fight the world, the flesh, and the Devil, and let us join together in the fasting and praying and almsgiving of this Lenten season knowing we have nothing to lose because we have already been given everything.