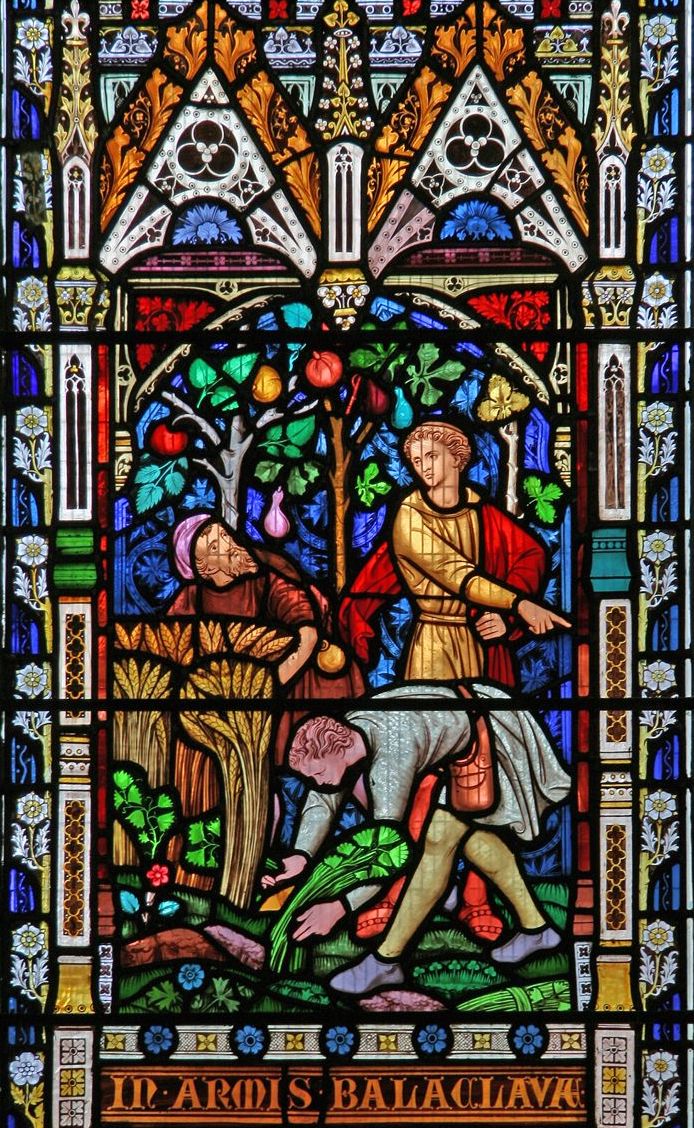 Then Jesus sent the multitude away… and his disciples came unto him, saying, “Declare unto us the parable of the tares of the field” (Matthew 13:36).

As a 21st century Christian, I am always fascinated by the way in which people of faith are portrayed in the movies and television shows we and our neighbors consume.  There are various stock characters like the hypocrite preacher or the cartoonishly sincere church lady; the cruel, uptight moralist scold or the cool, spiritual-but-not religious guy with long hair and a satchel.  As the years progress, these characters become more and more unmoored from reality as the writers of these programs become less and less familiar with actual Christians, rather than the fairy-tale villains they invent to feel superior.   The most pathetic part of the whole ordeal is that these writers set up big dramatic confrontations between the inevitably godless heroes and the invented people of faith they encounter in order to make the writer and his predominantly godless audience feel better about their conformity to dull, uninspiring damnation.  Usually, there is some dramatic speech by the hero who angrily channels what the writer wishes he could have said to the youth pastor his parents made him sit and listen to when he was 14 while music builds up in the background and the camera slowly gets closer and closer to the attractive actor’s face before finally cutting to the always less attractive fake Christian rendered speechless by the hero’s half-baked,  “Intro to Philosophy” level monologue.  The entire spectacle is actually quite embarrassing when we see past the lies and deceptions of a product designed to deceive us.

One of the lines these heroes almost always deploy is something like, “Why doesn’t your God do something?”  And, of course, the movie Christian has no answer—his silence serves as the ultimate sign that our culture’s idolatry of the self should continue without even a momentary interruption.  After all, if God is powerless, why bother worshipping Him, or more importantly, why bother obeying Him?  Christian, how would you answer that question if it were posed to you?  Why doesn’t our God do something about the rolling tides of evil cascading through our newspapers and notifications?  More specifically, if God is building His church in the world, why are there so many evil people within her? And if we really aim for the heart, why is there still so much evil in you and me?

Today’s parable of the wheat and the tares, or the wheat and the weeds, is part of our Lord’s answer to these questions.  His first salvo was a few verses earlier, the “Parable of the Sower,” in which Christ reveals that three out of the four types of people who hear the Word of God are in fact dead and unfruitful casualties of the Evil One, persecution, or the cares of the world and the deceitfulness of their possessions.  Putting this sobering revelation aside for another day, we now learn that evil is not hundreds of miles away from us; it isn’t trapped in some foreign territory where we no longer have to think about it; no, human souls devoted to evil—identified by our Lord as “the sons of the Evil One”—are standing next to you at Kroger while you pick up milk, saluting the flag with you as the parade passes by, eating dinner with at the local diner.  Far from the childish nonsense which encourages Americans to treat their faith as a hobby, our Creator lays out an all-encompassing vision of natural and supernatural reality which places every person you love and hate into two distinct groups over which our feelings or emotions or sense of right and wrong carry absolutely no weight.  The only thing that matters is, “Who is our Father?”

Remember, in the parable when the servants asked their Lord why there were all these weeds in the field, what did the Lord reply?  He said, “An enemy did this.” With those four words we get an incredibly important piece of information: God does not do the evil we see in the world.  It is not to be missed how truly unique it is for a god not be responsible for at least some of the evil in the world.  We might remember the Greek or Norse gods who murdered and raped their way through the imaginations of the poor, deluded men who followed them.  But, we really need go no further than the political or economic systems modern people worship to see that it is simply assumed that even the best, most modern gods will still have to cause a little evil to make the world a better place.  All of the false religions of the world, theistic and atheistic alike, are merely amplifications of our basest desires—hewn and fueled and fanned by the demonic prince whose earthly rule the Prince of Peace came to overthrow.  It is only the Living God who stands apart from the compromised humans and demons who have convinced people to worship them by appealing to their worst impulses.  Those four words, “An enemy did this,” are a defense of God’s honor and blamelessness in the same way as the words we hear in Genesis 1: “And God saw every thing that he had made, and, behold, it was very good” (Genesis 1:31).

Thus, it is not God who is to blame for the corruption of His good creation, and so screaming out, “Why doesn’t God do something,” is nonsense because God is not the author of evil; we are. God is not responsible in any real way for cleaning up the terrible mess we have made through our mad participation in sin and death.  In any event, when someone asks that question, he isn’t actually looking for justice in any meaningful sense; he is like a runaway teenager cursing his parents for not buying him a birthday present. And if the question is instead deployed as some kind of iron-clad means of disproving God’s existence, it fails in the same way that someone standing in my neighbor’s unmowed yard, whilst screaming, “Why doesn’t Fr. Richard mow this lawn?”, doesn’t prove or disprove my existence.  In short, when humanity joins with Satan and attempts to rebelliously rule the earth by our own code; we cannot then demand God save us in the way we would like to be saved; we cannot demand that God surrender to us while we demand His help?

But, that is not our full answer to the question, “Why doesn’t God do something?”  Of course, God doesn’t have to do anything for us, but this reality did not stop Him from breaking into history to defeat sin and death forever.  Far from doing nothing, God the Son strapped on the dirty robes of His fallen creatures and lived a life of loving obedience to the Father which led Him to the Cross.  It is this Son of Man who embodied what it means to be one of the “sons of the kingdom,” and it is in His footsteps that all the adopted sons and daughters of God must follow—exhibiting the patience of a people who know they must first serve if they ever want to rule.  We who live after Calvary and Easter, after the Cross and the empty tomb, already know that God has acted against the darkness and evil which plagues the world.  Our patience and trust in His methods and timetable are simply the right and proper reaction to the victory which now either animates our lives or rebukes the worldly existence slowly suffocating Satan’s many acolytes.

And that is the fate of the sons of the devil.  Jesus states, “The harvest is the end of the age, and the reapers are angels. Just as the weeds are gathered and burned with fire, so will it be at the end of the age. The Son of Man will send his angels, and they will gather out of his kingdom all causes of sin and all law-breakers, and throw them into the fiery furnace. In that place there will be weeping and gnashing of teeth” (St. Matthew 13:39-42).  We are again reminded that no one talks more about Hell than Jesus, which makes perfect sense given that His entire earthly mission was a manifestation of the Trinity’s undeserved love for the world.  Jesus knew He would be taking upon Himself the righteous and just wrath the sons of the kingdom would have suffered in Hell, and so He is the man who best understands this space of eternal justice, and it is He who has been given the authority to send His heavenly host to purge the world of its unrepentant and unrighteous creatures.  We cannot begin to understand the unsearchable riches of God’s love for us if we don’t understand the limitless depths of His righteous and cleansing fury—a wrath reserved for those who cause sin and break His laws: all those who are not the adopted sons and daughters of the kingdom prayerfully living in the perfect freedom known only in the service of our Savior.

Jesus tells us that the righteous will shine like the sun in the kingdom of their Father; the children of God will reflect their Creator’s glory in a world without evil.  And blessedly, it is beginning even now. We sons and daughters of the kingdom, in our loving obedience to our heavenly Father, will stand out from the darkened souls just biding their time until oblivion. We will bear fruit even as the weeds growing alongside us seek to choke our witness; we will bear fruit because Christ has planted us in the world, and His work is always good.