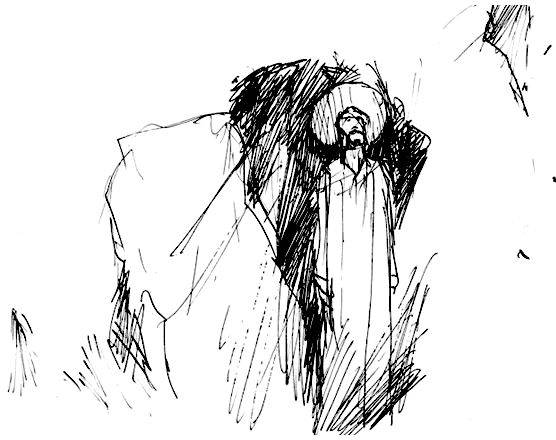 Any one whose ever been present at the birth of a child knows there is no event in human life so pregnant with terror and hope, beauty and filth, pain and love.  We, of course, benefit from clean hospitals and pain relievers—although even these wonders are incapable of completely sterilizing the messy and dangerous route by which everyone here entered this world. St. John, both in his account of the Gospel and here in His epistle to us, goes back again and again to the analogy Jesus used of being “born again” to describe the supernatural process by which we become new people destined for citizenship in the kingdom of God. There is an earthiness to this analogy; a reminder that the recreative work of the Holy Spirit is not ethereal or otherworldly but rather full of the dirt and water, full of the flesh and blood God loves because He created it. Being reborn as the children of God is as much a matter of our physical bodies (arms and legs, hair and eyes) as it is a matter of our conscience or will. Regeneration, the new birth, to be born of God, is the blessed act of our Creator reclaiming us from the disordered chaos humanity’s rebellion daily marches us toward. Our salvation is the Creator Himself saving us from madly walking toward our own personal “decreation” or put another way: our death. The wages of sin are death because rather than walking in the created order our loving God has established, humanity madly chooses to walk in the disordered chaos of the once uncreated universe. The only solution then to being one of the walking dead—separated from future decreation by nothing more than a few years of marauding about—is to be recreated by the same Trinity which created life in the first place: “In the beginning…the earth was without form and void, and darkness was over the face of the deep. And the Spirit of God was hovering over the face of the waters” (Genesis 1:2).  Without the Holy Spirit recreating us, we are the swirling dark waters of chaos, full of potential, but entirely handicapped by our need for the Creator. With the Holy Spirit, we are recreated and alive. With the Holy Spirit, we can overcome the world.

If, therefore, a central aspect of our new birth is its opposition and assured victory over a world desperately trying to decreate itself then it is the height of madness for Christians to uncritically align their lives according to the fashions and customs of the particular time in which they happen to be living. We should look at every behavior and custom and allegiance we share with those who are being overcome by the new creation and question each and every one of them. Why? Well, for starters, the world is insane, and we are all infected by its madness in ways we don’t even fully understand. To paraphrase David Foster Wallace, humanity is like two young fish swimming along who happen to meet an older fish swimming the other way, the older fish nods at them and says “Morning, boys. How’s the water?” The two young fish silently swim on for a bit, but eventually one fish looks over at the other and says “What the heck is water?”  St. John is telling us that we live in and around forces of darkness we just take for granted, forces of darkness I guarantee we like and enjoy, forces of darkness we think we need to live.

After hearing this news, we all probably just want to say something like, “Yikes, lighten up John.” But, John doesn’t have that luxury, St. John watched his Creator have the life strangled out of Him by His own creatures; St. John walked God’s mother home after seeing evil murder love on the Cross; St. John sat in the upper room while St. Peter sobbed in the corner, defeated and broken after betraying the Messiah, but St. John also saw death and chaos and decreation vanquished forever in the resurrected eyes of His beloved Lord and God and friend. He has seen the only One who has overcome the world, the only One who has overcome the great unraveling of God’s good creation we daily see in our own decay and eventual death.  Christ came and died to reverse this unraveling, and He did so by using our own evil against evil, by using our own darkness to make the true light shine brighter than a thousand stars. How can we possibly continue our resistance against such alien and overwhelming power? What victory can we possible hope to gain against a Father willing to send His Son to die in our place, a Son who volunteers for this terrible honor, and the Holy Spirit who unites our murderous, backward race to the very Godhead saving us?

Our only defense against such a God is to burrow deeper and deeper into our own dark hearts, to trust in anything other than the life giving Word and Sacrament God the Father has given us through the incarnation of God the Son and by the heart penetrating invasion of God the Holy Spirit. Word and Sacrament are the two lifelines which drag us back from the darkness and bring order to our chaotic lives. For, to be a Christian is to be “in the world but not of it,” to put ourselves in close proximity of evil while always knowing and acting in a way which reveals in whom we place our trust—especially if that makes us strange, especially if that strangeness leads to persecution, condemnation, and martyrdom.  Are we ready to be weird and strange and terrible in the eyes of the world for the truth? If not, Why?

In the West, it will be impossible on our own strength to recover lives centered on the church (what should be the home of Christian strangeness but is often just a banal and harmless compliance factory churning out people who look just like the culture around them), maybe it will take a disaster, maybe it will take all of our distractions being taken away. I know it will be the work of the Holy Spirit.  Following the example of our secular neighbors, we have built powerful defenses against just such an upheaval of our lives. I was reminded of this stark reality by two news stories. One came from China, where despite overt persecution, Christianity is growing faster than anywhere else in the world. Due to this rapid growth, China will almost certainly have more Christians in 10 years than we do in America. This particular news story was delivered via video and it showed dozens of Chinese Christians secretly receiving cheap, paperback Bibles, all of them in pure ecstasy, on their knees crying and wailing at being able to hold the Word of God in their hands.  The other story came from Sri Lanka where a young Christian woman was interviewed while kneeling in her bombed out church the day after she lost her husband, sister, and five children.  The woman was a little late for the packed out Easter Day service the day before, so she was in the back while the rest of her family were in the center pews as a suicide bomber showed up to fight Christ’s love with a bomb.  The reporter from the Wall Street Journal was only able to interview this woman because the faithful widow was there in her church the next day—the stone walls still covered by the blood of Christ’s newest martyrs, a statue of our Lord still sprinkled with the blood of her own family. Why was she there? She was there because that church is where the Lord of resurrection promised to meet her. Given this reality, the real question is, where else could she go?

Christian, who then would we say has the richer life?  Those Chinese Christians triumphantly clutching their first Bibles or Amazon’s Jeff Bezos with his 50 cars, a big house, and a divorce?  Who has the richer life?  That kneeling Sri Lankan widow who has nothing but her absolute trust in Christ, and so has everything, or the preening politicians, ignorant celebrities, and worldly fools we spend our precious time obsessing over instead. “Whoever has the Son has life; whoever does not have the Son of God does not have life” (1 St. John 5:12). We hear those words and we assume we know what life is, but we don’t. You and I haven’t yet begun to live because true life in this world is only known through the daily unfolding of Christ’s love and mercy found in Word and Sacrament; it is found in the moment by moment supernatural work of the Holy Spirit in the 27,000 days we have between womb and grave; it is found in God’s nurturing preparation of His new born children for an everlasting life we can’t even begin to imagine. The church is only a useful institution, it is only a living body, if it daily reveals that truth to itself and the world. We either know the Son in Spirit and water and blood, in Word and Sacrament daily administered to our wounded souls and brainwashed minds, we either have the Son as our daily companion and guide and Lord, or we are just running in the swirling chaos until we can’t run anymore. St. John is telling us again and again that our relation to God is not abstract or distant: we know God in the holy spaces made possible by the incarnation of Jesus Christ—in the spaces where heaven and earth are folded together by the Spirit. Incredibly, we don’t have to die to go to heaven. Someone has already died so that heaven can come to us, for indeed, heaven comes to us every time we open God’s Word; heaven comes to us every time we faithfully kneel before God’s heavenly seat of grace and justice to taste His perfect victory. If the American church doesn’t realize this truth, it will be the children of those Chinese Christians who will come to evangelize our darkened land, or maybe it will be the children of the Sri Lankans baptized in the blood of Christ and so ready to give the sacrificial love which moves fading empires and immortal hearts; it is those Christians who will land on our shores, as our ancestors once landed on theirs, and it is they who will overcome our world.

St. John is telling us, “Go in love and conquer.” May we daily heed his call; may we daily live in Christ.